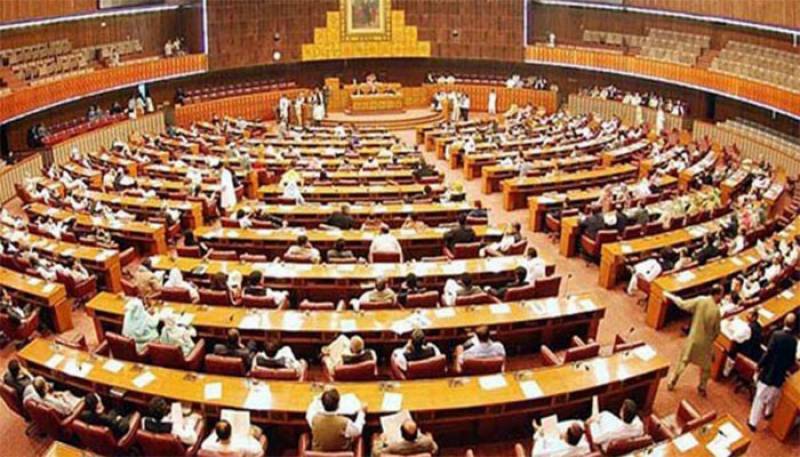 Islamabad (Web Desk): The Joint Sitting of the Parliament on Wednesday passed The Elections Second Amendment Bill, 2021, granting the right of vote to overseas Pakistanis and providing for use of Electronic Voting Machines (EVMs) in the elections.

According to details, Advisor to the Prime Minister on Parliamentary Affairs Dr Babar Awan piloted the bill in the House and the motion to consider the bill was passed with majority vote.

As per the bill, the Election Commission of Pakistan (ECP) shall, with the technical assistance of National Database and Registration Authority (NADRA) and any other authority or agency, enable overseas Pakistanis in prescribed manner subject to secrecy and security to exercise their right to vote during the general elections.

The bill also authorizes the ECP to procure electronic voting machines for casting of votes in general elections.

The Joint sitting has also passed the International Court of Justice (Review and Reconsideration) bill, 2021.

Moved by Law Minister Farogh Naseem, the bill provides for the right of review and reconsideration in the matter of Indian spy Kulbhushan Jadhav to give legal effect to the judgment of the International Court of Justice.

The Indian spy had been sentenced to death by a court in Pakistan back in April 2017.

Commander Jadhav was a RAW operative who facilitated numerous acts of terrorism in Pakistan, which resulted in the killings of countless innocent citizens of Pakistan.

A total of 221 lawmakers voted in favour of the motion while 203 lawmakers opposed it.

Later, the Parliament passed the legislative proposal which pertains to fair, free and transparent election through utilisation of technology and modern gadgets.

The bill is also aimed at granting voting rights to the Overseas Pakistanis which may only be possible by vesting exclusive authority in ECP with technical assistance of NADRA and other agencies.

It also asks to procure electronic voting machines (EVMs) for casting of votes in general elections.

Amendments were sought in section 94 and 103 of the Election Act, 2017 to achieve the aforesaid objectives.

The opposition, in protest, tore copies of the day's agenda and walked out of the session in protest. The bill on the use of EVMs was earlier deferred at the request of Adviser to the Prime Minister on Parliamentary Affairs Babar Awan but was later put up for a vote.

Following the protest, leaders of opposition parties gathered in the chambers of Leader of the Opposition in the National Assembly (NA) and Pakistan Muslim League-Nawaz (PML-N) President Shehbaz Sharif to ponder over a future course of action.

Addressing the media out the Parliament House, Shehbaz Sharif said the day would be remembered as the "blackest day in the history of the parliament".

Earlier, the Leader of the Opposition, while addressing the House, called electronic voting machines "evil and vicious machines".

"I have received your letter. We have carefully considered your letter and given you the full answer. I commend the opposition members for not coming under government pressure," he told the Speaker.

The opposition leader had earlier today written a letter to the NA speaker expressing his grievances over the hurry in passing the bills without a consensus.

Speaking in the House, Foreign Minister Shah Mahmood Qureshi said that Pakistan Tehreek-e-Insaf (PTI) doesn’t want to impose black law rather it is striving to eliminate the bad practices of previous governments.

The minister said that questions were raised on every election conducted after 1970. The time has come to improve our direction and focus on the development of the country, he added.

“We are tabling the bills as we have required majority for their approvals,” FM Qureshi said, adding that the PTI government is determined to move forward in a democratic way.

The minister said that we are introducing EVMs to bury evil desires.

He said that during the government of former premier Nawaz Sharif, the PML-N had a two-third majority. "If that government had unilaterally decided and used the majority to force reforms, then the PTI and the PPP would not have been able to do anything.

The PPP chief urged the NA speaker to run the house in a way that would not "undermine" parliament.

Bilawal said it was the first time in the history of Pakistan that a government tried to bring "unilateral" electoral reforms.

The PPP chairperson also lauded the PML-N supreme leader, Nawaz Sharif, for achieving consensus over electoral reforms in 2017 despite holding the required majority to bulldoze the said reforms in the house.

He said the opposition will not accept the next elections if the EVM bill was approved by the government despite several reservations by the Election Commission of Pakistan (ECP).

Bilawal said if there was no way to hold electronic voting in the parliament then how could the government bring EVMs across Pakistan in mere 20 months and added that opposition parties will go to court if the bill is passed as it "violated" the Constitution of Pakistan.

The PPP chairperson further added that his party and the PML-N endorsed the ballot right for overseas Pakistanis but the PTI was still taking a solo flight in this regard.

Bilawal also criticised the ordinance to facilitate convicted Indian spy Kulbhushan Jadhav, saying it made a mockery of the parliament.

The PPP chief also took the government to task over the deal with the International Monetary Fund (IMF), saying the masses were facing the brunt of the "policies made on the orders of the IMF".

He added the government wanted to bring the State Bank of Pakistan (SBP) under the control of the IMF, which was akin to "tying hands of parliament" and further said the opposition will also challenge this bill in court.

Speaking on his turn, Jamiat-Ulma-e-Islam-Fazl's (JUI-F) Maulana Asad Mahmood accused the government of laying the basis of discord and chaos by introducing such laws, adding that if the government bulldozed the legislation, the nation would not accept it.

“A law, which had become controversial even before passage, would lead to protests in the country for which the government and its supporters would be held responsible,” the JUI-F leader said, advising the government not to pass the law in haste.

Speaking in the House, MNA Mohsin Dawar, an activist of the Pashtun Tahaffuz Movement, reminded the lawmakers that one of their colleagues, Ali Wazir, was not present in the session.

"It is sad and shameful that Ali Wazir is not present in this house," he lamented, adding that

while negotiations were being done with groups such as the Tehreek-e-Labbaik Pakistan (TLP) and even the Tehreek-e-Taliban Pakistan (TTP), MNA Ali Wazir was languishing in jail for his one speech.

"It is sad that Waziristan is not represented here," he said, adding that any legislation on the conduct of elections must be done with the consensus of all lawmakers as has been the case in the past.