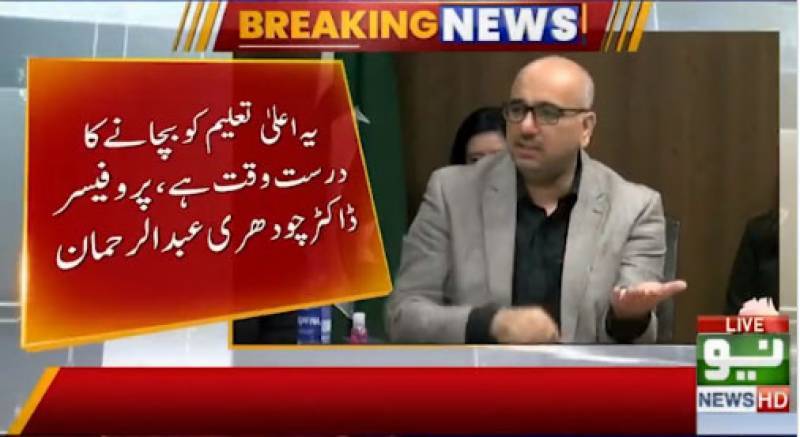 On the behalf of Association of Private Sector Universities of Pakistan Prof. Dr. Ch. Abdul Rehman congratulated Mian Muhammad Shehbaz Sharif for being elected as 23rd Prime Minister of Pakistan.

Constituted in 2002, the HEC is the supreme body established primarily for funding, overseeing, regulating, and accrediting the higher education institutions in Pakistan.

With more than 90 billion budget, the HEC plays an important and leading role towards building a knowledge based economy in Pakistan through quality assurance, development of new institutions and uplift of existing institutions in Pakistan.

Higher education in Pakistan, now-a-days is facing a number of problems of severe nature, which has damaged its image and progress as this important sector suffered a lot during last few years due to unilateral closed door policies by HEC management which were rejected by the stakeholders and even 178 out of 180 Vice Chancellors at the recent Vice Chancellors Meeting held at Bhurban. The private sector also suffered a lot due to discriminatory policies and undermining the autonomy of the universities guaranteed through respective Acts.

The letter further mentions that four years tenure of current chairman HEC is going to expire during last week of next month i.e May 2022 and it is the right time to rescue higher education by appointing the higher education leadership especially chairman HEC on merit through competitive process , which is possible only if the appointment is free from political and external intervention.

Being the controlling authority of federal HEC, Prime Minister was requested to constitute an unbiased and competent search committee consisting of academicians of international stature from all provinces and headed by an eminent scholar too.

Furthermore, candidates with controversial careers or convicted under plagiarism charges should not be considered. The role and composition of the search committee is vivacious for merit based transparent appointment of Chairman HEC and to avoid controversies, litigation and a further destruction of higher education in Pakistan otherwise, the present scenario may persist neutralizing efforts to uplift the higher education.

APSUP, being important stakeholder, assures its utmost cooperation to the current government in enhancing access, improving quality in higher education sector and contributing for socio-economic development of the country.