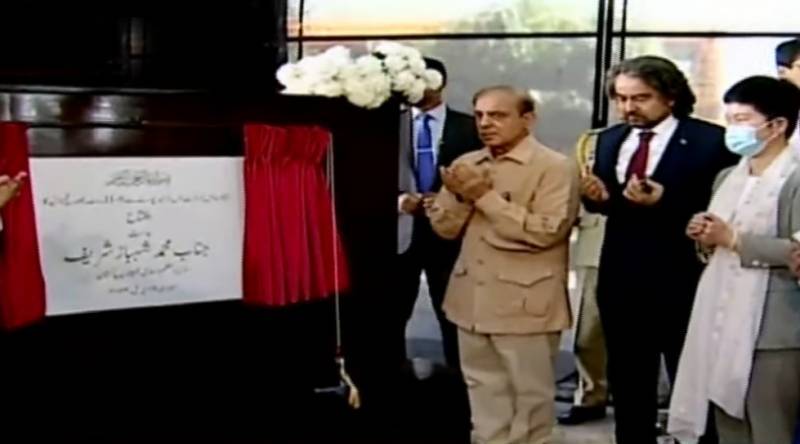 Islamabad (Web Desk): Prime Minister Shehbaz Sharif has reaffirmed the commitment to work tirelessly for the welfare of the people.

Addressing the inauguration of Orange Line Metro Bus Service from Peshawar Morr to New Islamabad International Airport on Monday, the premier said he will work with the same speed that he is used to.

He said this project was a gift from Pakistan Muslim League-Nawaz (PML-N) Quaid Nawaz Sharif to the residents of the federal capital. It was started in 2017 and it had to be operationalised in 2018.

"However like other projects, the previous government delayed this public transport project as well," Shehbaz Sharif said, adding that the lack of will and spirit delayed this project, otherwise, there was no other reason as funds were available for it.

The premier said that no ticket will be charged from the commuters using this metro service during the holy month of Ramadan. He said that 15 buses have been taken from Punjab Metro Authority to run this service.

PM Shehbaz expressed his gratitude to China and Turkey for their contributions in the public transport project.

He also asked the Chinese side to reconsider Karachi Circular Railway project as this will bring great dividends for the people of Karachi.

"China is a great friend which has always stood by Pakistan and contributed immensely to building Pakistan's economy," Shehbaz said, adding that the China-Pakistan Economic Corridor (CPEC) is a game changer project.

The prime minister was also appreciative of Turkey for standing by Pakistan in difficult times.

Earlier, Chairman Capital Development Authority (CDA) Amer Ali Ahmed said a ticketing system for the bus service has been completed which will soon be installed.

He said an app is also being launched which will facilitate the commuters to buy online ticket to avail this service.

Amer said that a metro bus project from Rawat to Faizabad will also be started.

The Islamabad metro bus will be covered in orange skin for route coding. The NHA to N5 station will take 6-8 minutes and from N5 to the airport around 25-30 minutes. The shuttle service will be run on a stretch of 11 kilometres.