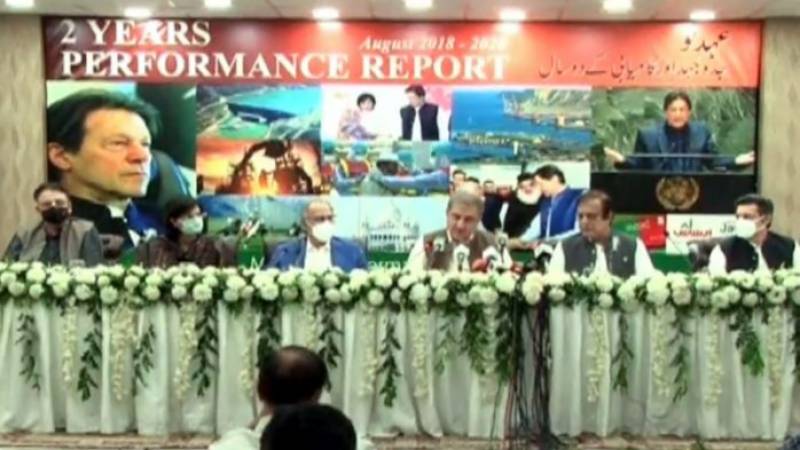 Islamabad (Web Desk): The federal government on Tuesday unveiled its two-year performance report highlighting its achievements on the internal and external fronts.

Addressing a joint news conference in Islamabad, members of the federal cabinet including Information Minister Shibli Faraz, Foreign Minister Shah Mahmood Qureshi, Planning and Development Minister Asad Umar, Minister for Industries Hammad Azhar, Adviser to the PM on Finance Dr Hafeez Shaikh and Special Assistant to the PM on Poverty Alleviation Dr Sania Nishtar presented the government's performance as the Pakistan Tehreek-e-Insaf (PTI) government marked two years since it took over the reins of the country.

Speaking to the newsmen, Information Minister Shibli Faraz said that the governments are answerable before the masses in a democratic set-up.

Our aim is to transform Pakistan into a welfare state, the minister said, adding that it is the vision of Prime Minister Imran Khan to serve the masses especially those belonging to downtrodden segments of the society.

The information minister said people have rejected the politics of vested interests.

Referring to the fifth generation warfare, Faraz said that the challenge for the government was to fight on the internal and external fronts as the enemies wanted to affect the economy and spread despair among the people. “We will win the war,” he said, “the nation will not fall into any political divide.”

Shibli Faraz asserted that the first two years were difficult but now the good days have started.

Sharing the achievements on the external front, Foreign Minister (FM) Shah Mahmood Qureshi said it was because of our effective policy of the last two years that the Kashmir dispute stands internationalised today.

He said that the United Nations (UN) Security Council held discussions on the outstanding dispute for the third time in a year.

He pointed out that Prime Minister Imran Khan in his address to the UN General Assembly and other international forums forcefully raised the Kashmir issue.

He said India wanted to isolate Pakistan at the regional and international levels but we foiled their plots.

The foreign minister said that intra afghan dialogue is about to commence and Pakistan has played its part in it.

“There has been a narrative shift regarding Pakistan over the last two years,” Qureshi said, adding that Pakistan is no longer considered part of problem but part of solution.

He said Pakistan is now being viewed as a partner in peace.

Shah Mahmood Qureshi said we gave the concept of economic diplomacy to enhance our economic footprint. He said during this period, we have also revitalised our relations with our longstanding friends.

“Our relationship with China is transforming into a strong economic partnership,” the FM said.

He added that the second phase of China-Pakistan Economic Corridor (CPEC) involves industrialization in Pakistan.

Enhancing agriculture productivity, poverty alleviation and human resource development are other important components of the second phase of the corridor project.

Qureshi said that Pakistan has signed strategic engagement plan with the European Union and as part of economic diplomacy also we also engaged with the Africa.

He said that PM Imran Khan's global debt relief initiative for the developing countries was acknowledged by the world.

Highlighting the performance of the finance ministry, Adviser on Finance Hafeez Sheikh said that it is our historic performance that the current account deficit was brought down from twenty billion dollars to three billion dollars.

The adviser said that the government also curtailed its expenditures. The budgets of President House and the Prime Minister House were reduced whilst that of the armed forces were frozen.

He said no borrowing was made from State Bank of Pakistan (SBP) during the last fiscal year. No supplementary grants were given during this period, Shaikh said.

The adviser said we gave a mega package of 1240 billion rupees to cope with the situation arising out of Covid-19.

He said the biggest portion of the package went to the disadvantaged segments of the society and the people rendered jobless by the breakout of Coronavirus. He said a payment of 250 billion rupees was made to them in the most transparent manner.

The adviser on Finance said our economic performance is now being hailed by international organizations including IMF, Moody's and Fitch. He said Pakistan Stock Market has been recognized as the best performing market by Bloomberg.

Hafeez Sheikh said no new tax was imposed in the current year budget whilst taxes on import of raw materials were either totally abolished or reduced significantly.

He said the exports witnessed growth of six percent in the month of July including that of cement by sixty-six percent.

He said the domestic sale of cement increased by thirty three percent. Similarly, there has been increase in the sale of fertilizers and vehicles.

Hafeez Sheikh said the month of July received the record remittances of 2.8 billion dollars. He said the FBR collection remained 300 billion rupees in the first month of current fiscal year.

Speaking on the occasion, Minister for Industries and Production Hammad Azhar said regardless of breakout of Covid-19, all the supply chains were kept opened to ensure availability of essential commodities to the people.

He said timely decisions were taken by the present government for gradual reopening of industries.

The minister said the government has given an incentive package to the construction industry.

As a result of this, there is an upsurge in the construction sector. He said this activity will further increase after the monsoon season.

Hammad Azhar said two new policies were given by the government including that of electric vehicle policy and mobile manufacturing policy.

He said the manufacturing of two and three wheelers electric vehicles will start this year while Pakistan is also to begin export of smart phones.

Hamad said Pakistan has also made significant progress to meet the action plan of FATF.

Minister for Planning Asad Umar said Pakistan is being ranked amongst the few countries which has successfully confronted Covid-19. He said the situation in Pakistan is far better when compared with other countries in the region.

The minister attributed this success to the decisions taken in a timely manner with consensus. He said the government proved it has the competence and the will to address the challenges.

She said the Ehsaas program will be further expanded and its access to the masses will be ensured.

The SAPM said that a programme is being launched in the next 15 days in all districts of Pakistan under which the children of deserving families will be given scholarships.