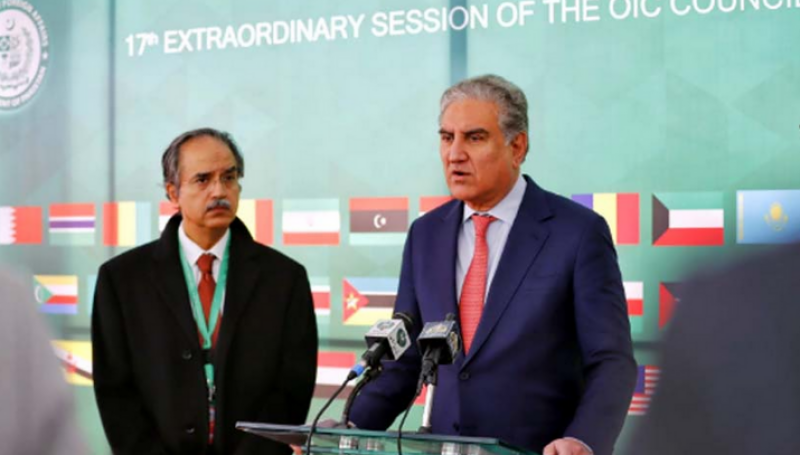 Islamabad (Web Desk): Foreign Minister Shah Mahmood Qureshi on Saturday expressed confidence that countries participating in the extraordinary session of the Organisation of Islamic Cooperation's (OIC) Council of Foreign Ministers (FMs), to be held on Sunday, will be able to reach consensus on measures to improve the situation in Afghanistan.

Talking to newsmen ahead of a meeting of senior officials of the OIC countries in Islamabad, FM Qureshi said about 437 delegates have so far got themselves registered for the OIC meeting.

He said the OIC moot will be important and historic.

FM Qureshi stressed that concrete and timely steps are required for the return of peace and stability in Afghanistan.

Shah Mahmood Qureshi was confident the OIC meeting will be able to build a consensus regarding Afghanistan.

“The aim of this conference was to divert the attention of the world community towards the Afghan situation, and progress is being seen on this end,” FM Qureshi said.

Responding to a question, the foreign minister said the visiting delegates will also meet him and Prime Minister Imran Khan on the sidelines of the OIC meeting.

Earlier, the Foreign Minister reviewed the arrangements made for the OIC moot. He visited different parts of the parliament house and expressed satisfaction over the arrangements.

It is pertinent to mention that Pakistan is hosting OIC Foreign Ministers' conference on Sunday in Islamabad to bridge gap between Taliban and international community on Afghan humanitarian crisis.

According to details, all the arrangements to welcome the foreign delegates of OIC Foreign Minister's extraordinary conference have been finalized.

The Constitution Avenue and all the prominent places in the twin cities along the route of foreign dignitaries have been decorated.

Special teams are receiving the OIC foreign ministers and other dignitaries. The Kingdom of Saudi Arabia is the convenor of the OIC Conference.

Besides the Foreign Ministers from the OIC Member States and Observers, participants would also include special invitees from the United Nations system, International Financial Institutions and some non-member states including the United States, United Kingdom, France, China, Russia, Germany, Italy and Japan, as well as the EU.

The Afghan Interim Government would also be represented at the CFM.

The meeting is being convened in the backdrop of the aggravating humanitarian situation in Afghanistan.

Besides expressing solidarity with the Afghan people, the CFM is expected to explore avenues for containing and reversing the rapidly deteriorating humanitarian situation in Afghanistan, especially in terms of food shortages, displacement of people and a potential economic collapse.