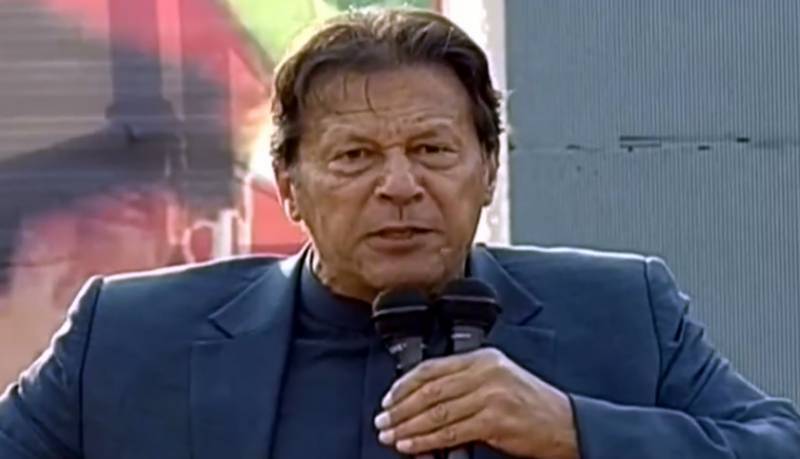 Addressing a public gathering in Mandi Bahauddin, the prime minister while challenging the opposition leaders to move a no-confidence motion against him, said all of their designs would fall flat rather would take them to jail.

“We are ready for everything. Kaptaan (Captain) is ready to thwart all of your plans. Insha Allah, you will again face defeat rather go to jail,” the prime minister said addressing a public gathering here.

Referring to the opposition leaders, he said all of the “thieves and dacoits” were in fact afraid of him and reiterated his stance of giving no NRO to them until they returned the looted public money.

He said Maulana Fazlur Rehman was worried about the PTI’s victory in the 2023 elections while Shahbaz Sharif was baffled after the Federal Investigation Agency (FIA) disclosed around Rs 4 billion deposited in the bank account of Maqsood, a low-paid sugar mill employee.

The prime minister said not only Maqsood, rather Shahbaz Sharif’s son-in-law and Nawaz Sharif’s two sons and Ishaq Dar had also been sent abroad to evade corruption cases.

“If you are innocent, why are you so frightened. Imran Khan will give you NRO. These cases are old. Why do you seek NRO from me. I commit with my nation that till my life, I will not leave them until they return nation’s money,” the prime minister remarked.

Referring to Maryam Nawaz for having some tapes, the prime minister said gone were the days when the judges used to be blackmailed and courts attacked.

“This is not the practice of a politician rather mafias. My nation will face this mafia. Leave them up to me. I will challenge them until I am alive,” he said.

PM Imran said the government had made a mistake of allowing Nawaz Sharif to go abroad on the pretext of medical treatment.

He said by electing the PTI twice with two-third majority, the people of Khyber Pakhtunkhwa disappointed Nawaz Sharif.

As the charged gathering chanted “diesel - diesel”, the prime minister said after three years the parliament was running without Maulana Fazlur Rehman, who every second day gathers the opposition leaders with a desire to remove the government.

Referring to the United Nations Development Program report, he said the poverty had declined in KP province which manifested his party’s performance.

“Why are you in a so hurry for no-confidence motion… Shahbaz Sharif is in trouble knowing that he will not survive in Maqsood case. If you are innocent, why don’t you ask for a day-to-day hearing,” he said.

Imran Khan said while facing the case filed by Shahbaz Sharif, he never fled abroad rather requested the court for swift proceedings and proved himself a “Sadiq and Ameen.”

He said the inflation impacting the common man was also a worry for him and the government was trying to ebb away its pressure by reducing taxes and duties on petrol import.

However, he said Pakistan had been put on right course with record exports, tax collection and remittances by the expatriates whom he always called a precious asset.

He said for the first time, the government also granted them voting right, enhanced farmers’ income, ensured the timely payment of sugarcane to farmers.

The prime minister told the gathering that for the first time in the country’s history, Pakistan had an independent foreign policy and the country was getting no dictation from any other country.

He said the previous rulers kept mum over the drone attacks just because they had their looted wealth abroad.

PM Imran said the government was bringing about an IT revolution in the country as 70% IT had increased. Moreover, the government was providing interest free loans to the youth and Rs 1 million health insurance to every family in Punjab.

“This is just the beginning. We have to make Pakistan a welfare state with Sehat Card being the biggest step towards it. By March, it will be available across Punjab for which provincial government has allocated Rs 400 billion,” he said.

Imran Khan told the gathering that the Madina State was based on two principles of justice and rule of law, failing to do which no nation could become a great nation.