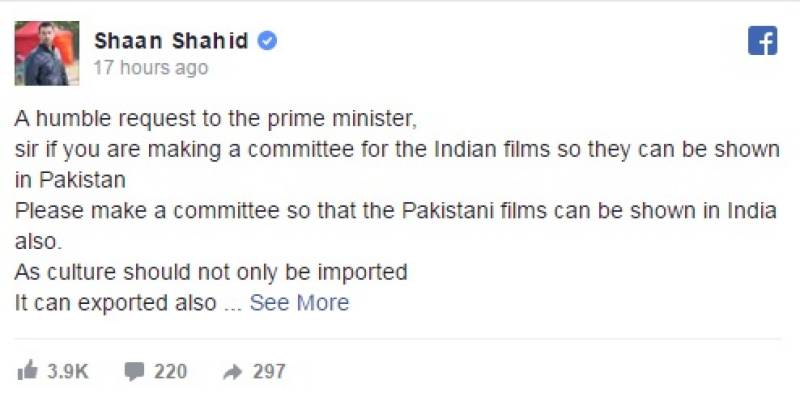 Shaan is always truthful and honest when it comes to express his sentiments. His patriotism for his country and loyalty for his profession have been highlighted by the fact that he has refused offers from Bolly wood many times.

Indian films screening in Pakistan is always a matter of controversy. He has now given a new proposal in the wake of the controversy surrounding ban on Indian films.

So when on Monday the Prime Minister Nawaz Sharif constituted a committee headed by Minister of State for Information Marriyum Aurangzeb to look into the matter of Indian movies being banned from local cinemas, the actor had a suggestion.

Shaan is of the opinion that if the ban on Indian movies is being lifted in Pakistan, then a committee should also be formed in India to ensure the release of Pakistani films.

Talking about it on his Facebook account, senior actor wrote, “A humble request to the prime minister, sir if you are making a committee for the Indian films so they can be shown in Pakistan. Please make a committee so that Pakistani films can also be shown in India. Culture should not only be imported. It can also be exported. Regards, a humble Pakistani, Shaan Shahid.”