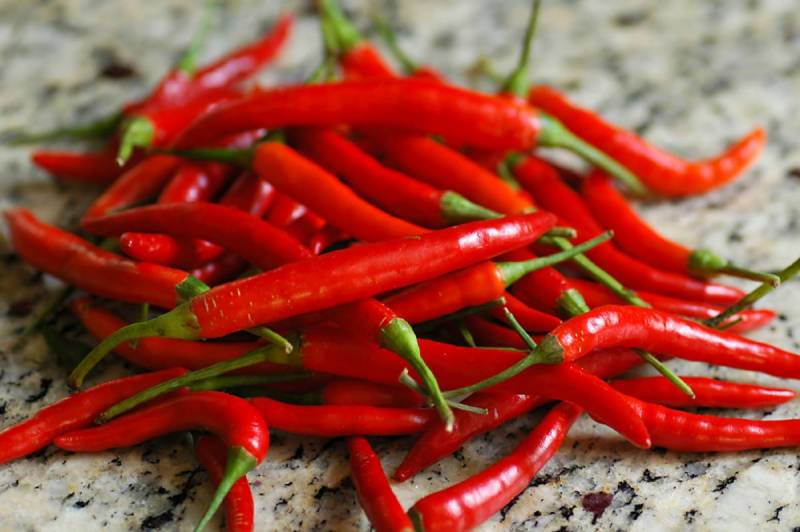 Burlington, USA (Web Desk): A group of researchers from the Larner College of Medicine at the University of Vermony claimed that consumption of hot red chilli peppers is associated with a 13 per cent reduction in deaths, primarily due to heart disease or stroke, in a large prospective study published in medical journal PLoS ONE.

Another study conducted in China has previously examined chilli pepper consumption and its association with mortality which published in 2015.

The researchers examined national health and nutritional data from more than 16,000 Americans over a 23 year period and found that the consumption of hot red chilli peppers delayed death among those who ate the spicy fruit.

According to the study, those who regularly consumed hot chilli tended to be "younger and consume more vegetables and meats".

They also had lower HDL-cholesterol compared to participants who did not consume red chilli peppers.

An explanation for why chilli may delay mortality is far from clear, but the researchers believe it may have everything to do with the way the capsaicin - the principal component of chilli peppers - affects the body's Transient Receptor Potential (TRP) channels.

Many of the channels mediate a variety of sensations like the sensations of pain, hotness, warmth or coldness, different kinds of tastes, pressure, and vision.

Study authors Mustafa Chopan and Benjamin Littenberg said that the ‘capsaicin’ found in chilli pepper is believed to play a role in cellular and molecular mechanisms that prevent obesity and modulate coronary blood flow.

It also possesses antimicrobial properties that may indirectly affect the host by altering the gut microbiota, Chopan and Littenberg say.

Chopan said, "Because our study adds to previous findings, chilli pepper - or even spicy food - consumption may become a dietary recommendation and/or fuel further research in the form of clinical trials."