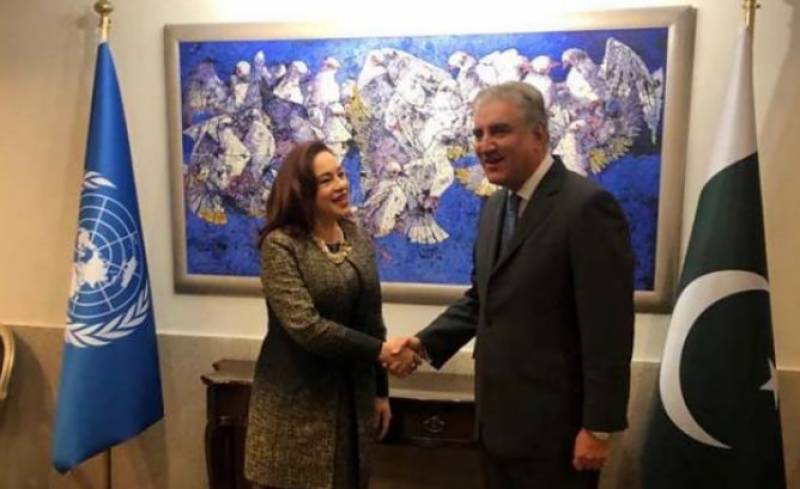 The UNGA president, who arrived in Islamabad earlier in the day met Foreign Minister Shah Mahmood Qureshi at the Foreign Office in Islamabad.

The foreign minister apprised the visiting dignitary of Pakistan's grave concern over the gross human rights violations by the Indian forces in occupied Kashmir.

He called for implementing the UN Security Council's Resolutions on Kashmir in letter and spirit to resolve this longstanding issue.

Both sides agreed that a strong and vibrant United Nations is inevitable for the lasting peace and stability in the world.

Later, addressing a joint press briefing Foreign Minister Shah Mehmood Qureshi said we had a very constructive meeting with the UNGA President during which the issue of human rights abuses in Occupied Kashmir was also effectively highlighted.

He said that the visiting dignitary was informed of the grave extent of violations by occupied Indian forces in the held valley.

The FM said Pakistan is actively engaged with Afghanistan for a long and durable solution to the Afghan conflict as it believes peace in the neighboring country is also in its own best interest.

He added that Pakistan believes in Afghan-led and Afghan owned peace process.

Speaking on this occasion, UNGA President Maria Fernanda Espinosa appreciated Pakistan's active and vibrant role in the realisation of goals of the United Nations. She said all member states need to play their role in overcoming the impacts of global climate change.

Espinosa appreciated Pakistan for hosting such a large number of Afghan refugees over all these years.