On Thursday, Asad Umar announced to leave finance ministry after being offered the portfolio of energy ministry but he turned down the offer and decided to quit the federal cabinet. 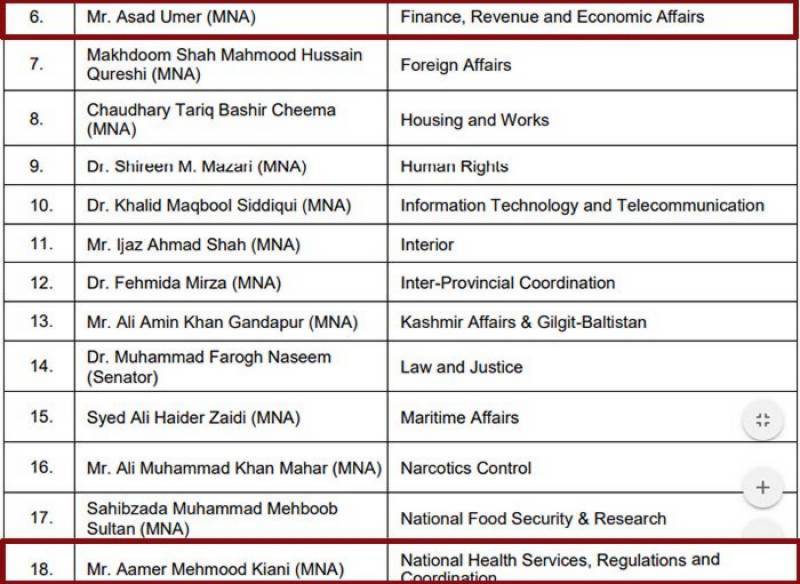 Later the day, Prime Minister Imran Khan made a major reshuffle in his cabinet.

The portfolio of information minister has been taken away from Fawad Chaudhry, who has been named as the federal minister for science and technology.

Minister of state for interior Shehryar Afridi has now been named the Minister for States and Frontier Regions (Safron).

The PTI government has also announced a federal interior minister for the first time, with the portfolio — earlier held by the PM himself — going to ex-spymaster Brig Ijaz Ahmed Shah, who was appointed the federal minister for parliamentary affairs just last month.

Ghulam Sarwar Khan, who previously was the petroleum minister, has now been named the federal minister for Aviation Division.

Azam Swati, who resigned as the federal minister for science and technology last year, has been appointed as the Federal Minister for Parliamentary Affairs.

The prime minister, according to a notification issued by the Cabinet Division, has also appointed a trio of Special Assistants to the Prime Minister (SAPM).

The notification states that Dr Firdous Ashiq Awan has been made the SAPM on Information and Broadcasting Division, while Dr Zafarullah Mirza has been assigned the portfolio of National Health Services, Regulations and Coordination.

Meanwhile, Nadeem Babar will serve as the SAPM on Petroleum Division.

Pakistan has always been like a home, says Erdogan in address to ...

Pakistan gets another four months to exit ‘grey list’: sources