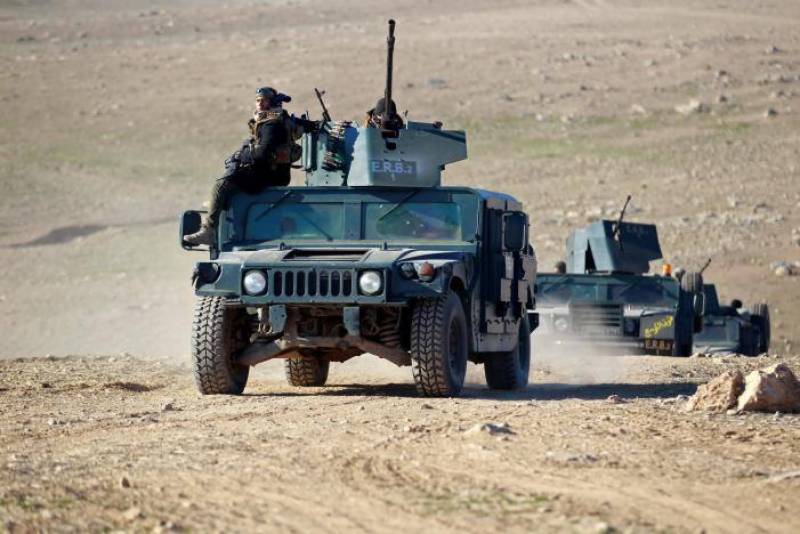 Baghdad, Iraq (Reuters): The Iraqi military said that U.S.-backed Iraqi forces began moving on Sunday toward Mosul's airport, the first target of a ground offensive to capture the western side of the city that remains under control of Islamic State.

Earlier on Sunday, Iraqi Prime Minister Haider al-Abadi announced that the formal start of a ground offensive on western Mosul, asking the Iraqi forces to ''respect human rights'' during the battle.

Islamic State militants are essentially under siege in western Mosul, along with an estimated 650,000 civilians, after U.S.-backed forces surrounding the city forced them from the east in the first phase of an offensive that concluded last month.

According to statements from the armed forces joint command, Iraqi federal police units are leading a northward charge on the Mosul districts that lie west of the Tigris River, aiming to capture the Mosul airport, located just south of the city.

They captured several villages and a local power distribution station in the first hours of their progress and killed several militants including snipers, the statements said.

The commander of the U.S.-led coalitions forces, Lt. Gen. Stephen Townsend, said in a statement, “Mosul would be a tough fight for any army in the world.”

Iraqi planes dropped millions of leaflets on the western side of Mosul warning residents that the battle to dislodge Islamic State was imminent as troops began moving in their direction, the Iraqi Defence Ministry said on Saturday.

United Nations Humanitarian Coordinator for Iraq Lise Grande told Reuters on Saturday that up to 400,000 civilians could be displaced by the offensive as residents of western Mosul suffer food and fuel shortages and markets are closed.

Commanders expect the battle in the west to be more difficult than in the east because tanks and armored vehicles cannot pass through its narrow streets and alleyways.

According to residents, the militants have also developed a network of passageways and tunnels that will enable them to hide and fight among the civilians, disappear after hit-and-run operations and track government troop movements.

It was from the pulpit of the Mosul Grand Mosque that Islamic State leader Abu Bakr al-Baghdadi declared a "caliphate" over parts of Syria and Iraq in 2014.

The city -- Iraq's second biggest -- is the largest urban center captured by Islamic State in both countries and its de facto capital in Iraq. Raqqa is its capital in Syria.

According to Iraqi estimates, Islamic State was thought to have up to 6,000 fighters in Mosul when the government's offensive started in mid-October. Of those, more than one thousand have been killed.

The remainder now face a 100,000-strong force made up of Iraqi armed forces, including elite paratroopers and police, Kurdish forces and Iranian-trained Shi'ite paramilitary groups.

The United States, which has deployed more than 5,000 troops in the fighting, leads an international coalition providing critical air and ground support, including artillery fire, to the Iraqi and Kurdish forces.

The Sunni group imposed a radical version of Islam in Mosul, banning cigarettes, televisions and radios, and forcing men to grow beards and women to cover from head to toe. Citizens who failed to comply risked death.

Capturing Mosul would effectively end the militants' ambitions for territorial rule in Iraq. They are expected to continue to wage an insurgency, however, carrying out suicide bombings and inspiring lone-wolf actions abroad.