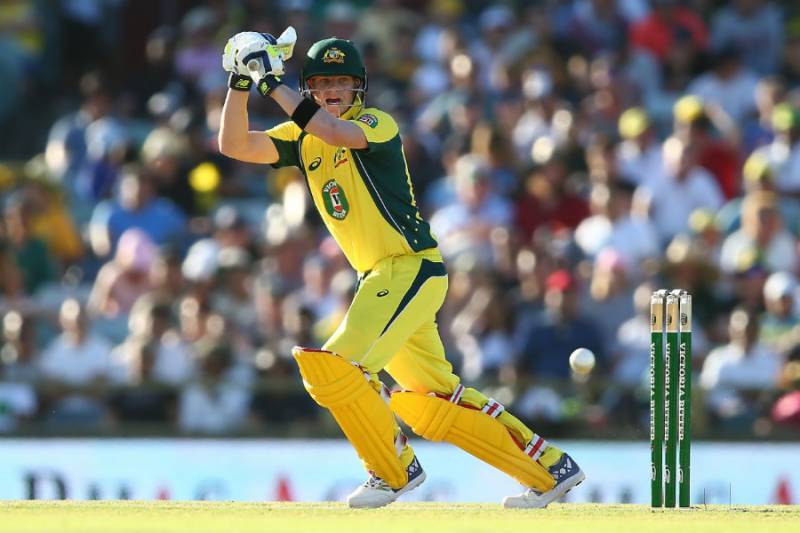 Perth (Staff Report): Energized by a quick century from Captain Steve Smith, Australia cruised to a 7-wicket victory over Pakistan in the third ODI at W.A.C.A. Ground, Perth on Thursday.

Australia are now leading the five-match ODI series by 2-1.

Handscomb got another chance after he was bowled out but called back after Junaid's delivery was declared as a no-ball. He was dropped off another Junaid delivery later.

Earlier today, Pakistan scored 263 for 7 in 50 overs after Babar Azam's departure in the third ODI against Australia.

Pakistan batsman Babar Azam became the first Pakistani to reached 1000 ODI runs  in 21 innings after he made 84 runs in the third ODI. The young batsman achieved the feat leveling the record with Sir Viv Richards, Kevin Pietersen, Jonathan Trott and Quinton de Kock.

Shoaib Malik bowled out after an aggressive knock of 39. Opener Sharjeel Khan scored a half-century before departing.

Mohammad Hafeez, the captain in place of injured Azhar Ali, fell for 4 off a Hazlewood delivery. Asad Shafiq went for 5, leaving Pakistan three down for 99.

Australia won the toss and elected to bowl first in the third one-day cricket international against Pakistan at the W.A.C.A. Ground, Perth.

The 5-match series was level at 1-1 after Australia won the first match at Brisbane by 92 runs and Pakistan won the second in Melbourne by six wickets.

The hosts made two changes to the lineup that played in Melbourne on Sunday, with Mitchell Starc (rested) and Mitchell Marsh (injury) omitted for ODI debutant Peter Handscomb and fast bowler Billy Stanlake.

Handscomb, 25, was presented his maiden ODI cap, No.219 for Australia, by legendary wicketkeeper-batsman Adam Gilchrist.

Pakistan named an unchanged line-up, with Mohammad Hafeez to captain again in the absence of injured skipper Azhar Ali.