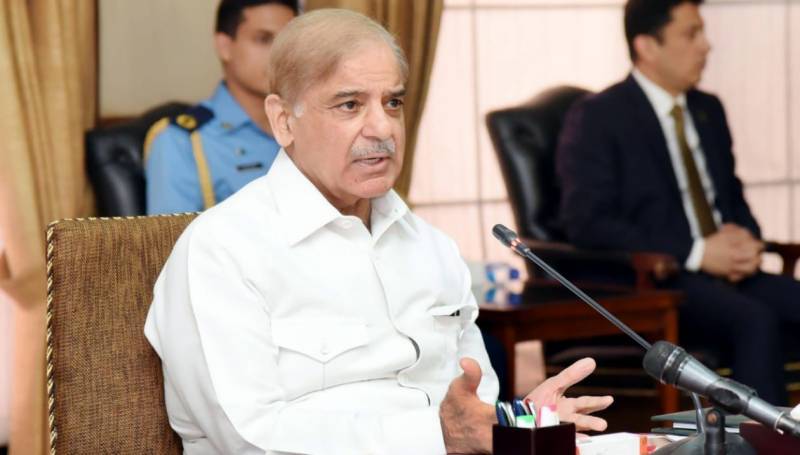 In a tweet on Tuesday, the premier said that PTI chief Imran Khan was given a "free pass" despite his repeated and shameless criticism on state institutions.

"I urge the Election Commission of Pakistan to announce long-delayed judgment on PTI foreign funding case," he said.

PM Shehbaz stressed that the impunity given to Imran Khan had “hurt the country”.

I urge the Election Commission of Pakistan to announce long-delayed judgment on PTI foreign funding case. For long has Imran Niazi been given a free pass despite his repeated & shameless attacks on state institutions. Impunity given to him has hurt the country.

The ECP had reserved its judgment on June 21.

The verdict was reserved after the completion of a briefing by the financial expert brought by PTI founding member Akbar S Babar.

Babar has alleged major irregularities in the party's finances, including in funding from outside Pakistan.

ECP concluded the case after seven years of trial, which started in 2014, when Babar filed it. However, the date of the announcement of the verdict is yet to be revealed.

PM Shehbaz Sharif's message comes following the PTI's victory on 15 out of 20 seats of Punjab Assembly in the by-elections held on Sunday.

Backed by its coalition parties, PML-N could obtain only four seats while one independent candidate also got victory in the by-elections.

The 20 seats of Punjab Assembly fell vacant after the ECP de-seated the PTI lawmakers for voting for PML-N's candidate Hamza Shehbaz in election for the chief minister’s slot.

On the other hand, former prime minister and PTI chief Imran Khan severely criticised the ECP.

Speaking to the public in a televised speech on Monday, the former premier urged Chief Election Commissioner (CEC) Sikander Sultan Raja to resign accusing him of "incompetence", and claimed that four million people were shown dead on voter lists.

“But apart from that, he wholeheartedly participated in the polling process to ensure that PML-N wins,” the PTI chairman said.

Khan said that the PTI had “lawful” eight cases, which the ECP, headed by Raja, rejected to hear.

He said that the party then went to the courts to seek justice, where it was served the same. “We do not trust this election commissioner.”

"Despite several cases of rigging during polls being brought before the CEC, he never found anyone guilty, and, as a result, malpractice continued as no one had feared accountability," the PTI chief said.

Meanwhile, PML-N Vice President Maryam Nawaz on Monday linked Imran Khan’s criticism of the ECP with his "fear of being exposed" in the foreign funding case.