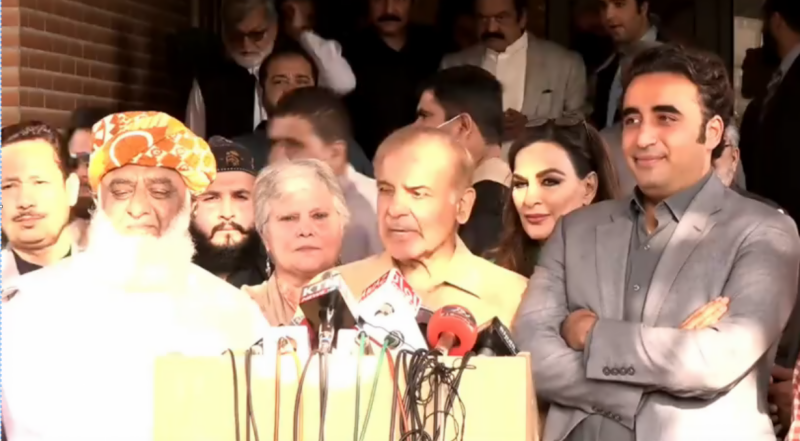 Islamabad (Web Desk): The leaders of the joint opposition parties on Saturday warned the Pakistan Tehreek-e-Insaf (PTI)-led federal government that if the no-confidence motion against Prime Minister Imran Khan is not tabled on Monday, then they will stage a sit-in inside the National Assembly (NA).

"We want Monday's session to start with no-confidence motion but if it is not summoned by Monday then we will stage a sit-in the house. We will then see how you will be able to organise the Organisation of Islamic Cooperation (OIC) meeting,", the PPP chief said.

The OIC session of foreign ministers is set to take place in Islamabad from March 22 to 23.

Bilawal said that the Opposition also wants the OIC moot to take place. The entire country wants it to take place. But in order for it to happen in a proper manner without any problems, the only way is that the speaker plays his due role.

Bilawal Said that the NA Speaker should not become a member of the PTI and he should think about the country, the democracy and the OIC.

"If he starts the no-confidence proceedings on Monday, there would be no issues in the way of the OIC and we, too, would not have any objections as the no-trust clock would be running in accordance with the law and Constitution."

The PPP chairman said the government was threatening lawmakers against voting in favour of the no-confidence motion, which is seeking the ouster of PM Imran Khan.

Opposition Leader in the National Assembly and PML-N President Shehbaz Sharif said that if the speaker does not call the session within the stipulated time and uses "delaying tactics, we will then be compelled to stage a sit-in in the assembly hall".

Those coming to attend the OIC summit are the guest of the entire nation, he said, adding, "But we will not allow you to go against the law and Constitution under the garb of this (OIC moot). We will stage a sit-in then."

Condemning PTI workers' attack on Sindh House Shehbaz said that it was in fact an attack on Pakistan.

He said that all this is happening on the direction of Imran Niazi, the one who is confident of winning never fights. Imran Khan is ready to cross all limits to save his government, he said.

The PML-N leader said that the opposition will only use constitutional means to make their no-trust motion successful, adding that the PTI allies have also turned their backs on the government.

"When the members were being transported via a plane to support the PTI government then the act was called the voice of conscience but now when the same members are voting against the government, they are being called mules," the PDM chief said.

He said that not even a filthy person can use the vulgar language being used by the premier in political gatherings these days.

"Our destination is near and we will take this illegitimate and incompetent government to its end. Fazl said.

It is pertinent to mention that the Opposition had submitted two sets of documents, one under Article 54 of the Constitution to requisition the NA because it was not in session at the time, and the other a resolution calling for a no-confidence vote against the prime minister.

According to Article 54, a session of the National Assembly can be requisitioned if at least 25 per cent of the members sign it, following which the speaker has a maximum of 14 days to summon a session.

After the National Assembly is in session, the rules of procedure dictate that the secretary will circulate a notice for a no-confidence resolution, which will be moved on the next working day.

From the day the resolution is moved, it "shall not be voted upon before the expiry of three days, or later than seven days," according to the rules.

Therefore, the speaker must call the lower house in session by March 22, while voting on the no-confidence motion must take place between three and seven days after the session is summoned.