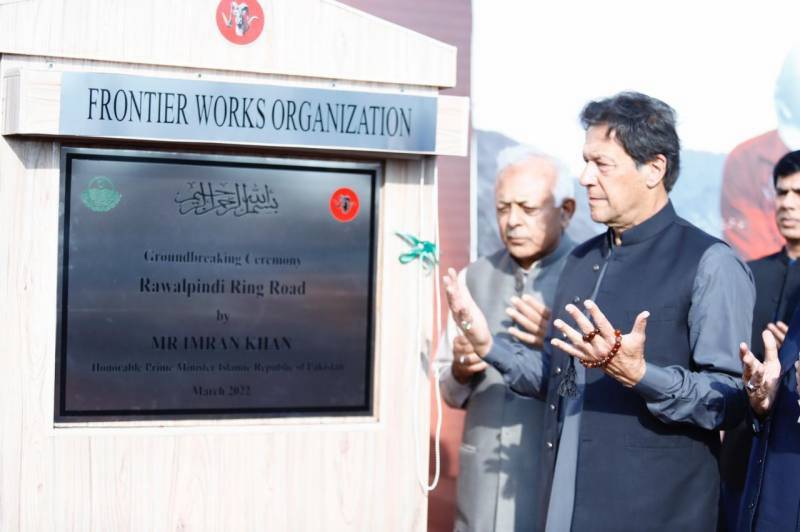 Islamabad (Web Desk): Prime Minister Imran Khan on Saturday said that the dissident Members of National Assembly (MNAs) belonging to his Pakistan Tehreek-e-Insaf (PTI) will return back to the ruling party because of 'public pressure'.

Addressing the groundbreaking ceremony of Rind the Rawalpindi Ring Road project, the premier said that he was seeing public anger over selling of consciences.

PM Imran claimed he was seeing that the dissident lawmakers would return to PTI as the no-confidence vote against him nears.

I am giving the dissidents the "benefit of doubt," Imran Khan said, adding that PTI members had been reaching out to them.

Speaking about the no-confidence motion tabled by the opposition against him, Imran Khan said that move was a "good thing" as people could now see that money was being used "openly" to change the party loyalties.

He said that a market has been set up for buying the conscience of lawmakers and the conscience is being brought illegally through the people's money.

"If the PPP is 'buying' the loyalties of the PTI lawmakers, then it must be through the funds given to the Sindh government," PM Imran said, adding that it is illegal as the people's money cannot be used to lure in other party lawmakers.

Shedding light on the incident of the Sindh House, the premier said that "never in the history of Pakistan" has any provincial force been deployed "just to safeguard" the MNAs of other parties.

"So why did they need Sindh police over there Because illegal activities were taking place there. People have now seen their reality," the premier said.

He said that the masses have finally gotten to know the reason behind the country's underdevelopment: "because people's conscience is brought and they do politics just to earn illicit money."

PM Imran said this a day after the enraged workers of PTI forcibly entered the Sindh House in Islamabad on Friday following a protest outside the building against the disgruntled MNAs.

Following the incident, two PTI MNAs, Attaullah Niazi and Faheem Khan, and 12 PTI members had been arrested by the Islamabad Police for partaking in the protest. But later, the detained lawmakers and the activists had been released on a personal guarantee.

The Islamabad police had also registered a first information report (FIR) on behalf of the state against the two PTI MNAs and the workers involved in the protest.

On March 17, several PTI lawmakers were found staying in the building.

Talking to newsmen, some of them had said that they would vote on the no-confidence motion tabled against the premier in "accordance with their conscience" and that they had developed differences with PM Imran.

Speaking on the occasion, MNA Raja Riaz, who belongs to the disgruntled Jahangir Tareen faction of the party, had claimed that around 24 MNAs belonging to the ruling party were staying in the Sindh House.

Earlier, PM Imran performed the groundbreaking of the Rawalpindi Ring Road project, which is a 38.3 kilometers long road that will comprise six lanes and an interchange will also be constructed on it.

He stressed the need to ring-fence the major cities for the protection of cultivable land.

Imran Khan said he has ordered the relevant authorities to produce master plans of all mega cities at the earliest.

The premier said said due to rapid increase in population, our cities are under stress and are expanding, fading the and green cover.

"Special attention is being paid in all new projects to protect green areas and making them environment friendly," Khan noted.

Mentioning the importance of Central Business District and Ravi city, PM Imran said that these projects will not only increase economic activities but will also help controlling the unplanned sprawl of the Punjab's capital.

He said that Nullah Lai project is also of significant importance for the twin cities, therefore, soon a plan will be finalised for its construction.