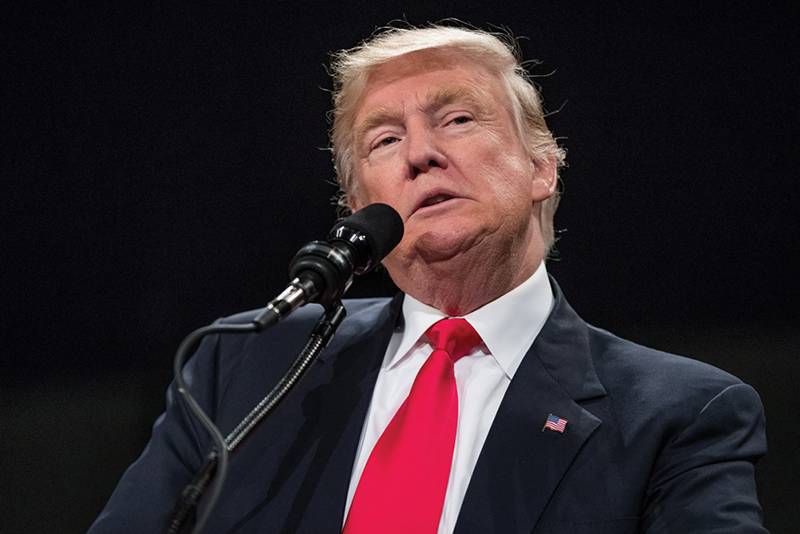 Jerusalem (Reuters): United States presidential trips are an opportunity to project power and burnish diplomacy but they come with political dangers and potential pitfalls, too. For Donald Trump, several of those await in Jerusalem and Bethlehem next week.

A nine-day tour taking in Saudi Arabia, Israel, the Palestinian territories, the Vatican and NATO would be a tall order for any president. But for Trump, under siege at home over questions about his administration's links to Russia and his firing of FBI chief James Comey, it is a particularly demanding itinerary, especially for a first overseas venture.

During his campaign, Trump promised to be Israel's "best friend" if elected, and signaled that it was okay for the Israeli government to go on building settlements on occupied land since he didn't regard it as an obstacle to peace.

Since taking office, however, Trump has shifted tack, urging Prime Minister Benjamin Netanyahu to "hold back" on settlements, and praising Palestinian President Mahmoud Abbas at a White House meeting this month, part of an effort to bring the sides together and launch another attempt at Middle East peace.

It looks unlikely Trump will manage to get Netanyahu and Abbas to shake hands during his 28-hour visit to the Holy Land, and the prospects of him setting a timetable for a resumption of peace talks also look dim. But that doesn't mean other diplomatic traps aren't lying in wait.

Perhaps the most sensitive is what Trump ends up saying -- or not saying -- about a promise he made during the election campaign to move the U.S. embassy from Tel Aviv to Jerusalem.

No country in the world has its embassy to Israel in Jerusalem since the status of the city remains disputed in the eyes of the international community. While Israelis call Jerusalem their "indivisible capital", Palestinians want the capital of any future state in the east of the city.

Only once Jerusalem's final status is agreed via direct negotiations between the Israelis and Palestinians are foreign countries likely to move their embassies to the city.

In the meantime, Trump has appointed as his envoy to Israel David Friedman, a devout Jew who insists the embassy must be moved and plans to work out of Jerusalem some days of the week.

When Friedman arrived in Israel this week, his first act was to visit Jerusalem's Western Wall, the holiest place where Jews are permitted to pray, a symbolic departure from usual protocol.

Trump intends to visit the Western Wall too, something past presidents have not done because of the political sensitivities.

The Wall stands in the Old City in the east of Jerusalem, which Israel captured during the 1967 Middle East war. Officially, the United Nations, the United States and others consider the Old City and East Jerusalem occupied territory and do not recognize Israel's claim to sovereignty over it.

As a result, the U.S. State Department turned down a request for Netanyahu to accompany Trump and his family when they visit the site on Monday. Instead, the president will be accompanied by the rabbi of the Western Wall.

"This is the most appropriate way to show the proper deference to such a significant holy site," a State Department official said.

Yet in an interview with Israel Hayom, a pro-Netanyahu paper, Trump said his plans "could still change" and suggested he might ask Netanyahu to join him, a last-minute move that would please Netanyahu but anger the Palestinians.

On Tuesday, Trump is scheduled to visit Abbas for an hour in Bethlehem, the birthplace of Jesus, which lies a few kilometers south of Jerusalem in the Israeli-occupied West Bank.

To get there, the president's convoy will have to pass through Israel's high-security checkpoint and towering concrete barriers that cut the West Bank off from Jerusalem.

Both Palestinians and Israelis will be on alert to see what language Trump uses when he meets Abbas. While the president hasn't clearly backed a two-state solution -- Israel and a Palestinian state -- he is expected to voice support for Palestinian "self-determination", a phrase that nods in the direction of an independent Palestinian state.

After negotiating that diplomatic minefield, Trump is scheduled to visit Yad Vashem, Israel's Holocaust Memorial. He has set aside 15 minutes for the visit, unlike previous presidents who spent an hour or more at the site.