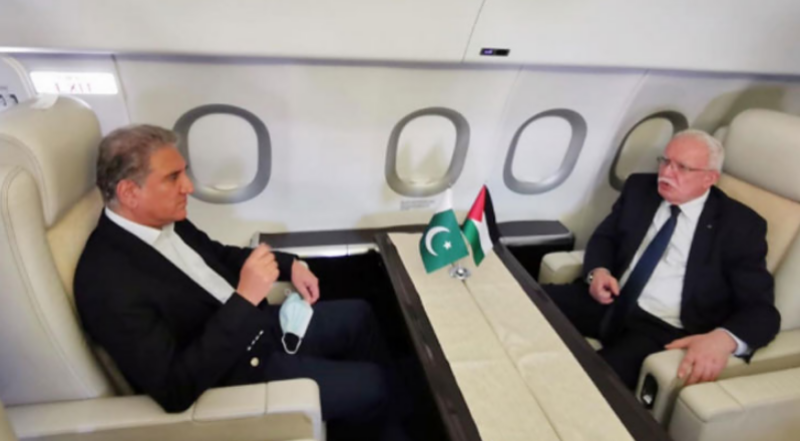 Ankara (Web Desk): Foreign Minister Shah Mehmood Qureshi, who is on a diplomatic peace mission, left for New York from Turkey on Wednesday to highlight the issue of Israeli atrocities in Palestine.

The foreign ministers of Palestine, Sudan and Turkey are also accompanying the Pakistani Foreign Minister, the Radio Pakistan reported.

FM Qureshi will attend the emergency meeting of United Nations General Assembly (UNGA) in connection with Palestine issue tomorrow (May 20) and will draw the attention of international community on Israeli atrocities against unarmed Palestinians.

The foreign minister will urge the world body to play is due role in stopping Israeli atrocities against innocent Palestinians.

He will also hold important meetings with President General Assembly and other personalities.

Prior to his departure, FM Qureshi held a meeting with his Palestinian counterpart Riyad al-Maliki and exchanged views over evolving situation in the Palestine.

The foreign minister also briefed Al-Maliki about Pakistan's diplomatic efforts to bring the international community's attention to the continued violence of Israeli forces in Palestine and finding a peaceful solution to the Palestine issue.

Qureshi also conveyed to the foreign minister the Pakistani nation's solidarity with their Palestinian brethren in their hard time.

For his part, Al-Malaki informed Qureshi about the situation in Palestine and efforts being made to bring about a reduction in violence.

He also thanked Pakistan for its "clear, unambiguous and principled stance" on the Palestine issue.

The foreign minister, in turn, appreciated Erdogan's "clear and unambiguous stance" on the issues of Palestine and occupied Kashmir.

He also thanked the Turkish president for the country's "consistent and forceful support" for Pakistan at all international fora regarding the Kashmir issue.

During the meeting, Qureshi and Erdogan discussed bilateral relations as well as the situation in Palestine.

Qureshi conveyed President Dr Arif Alvi and Prime Minister Imran Khan's good wishes to Erdogan, saying that "similarities in the thought and vision" of the Turkish and Pakistani leadership were the reason behind the stability in bilateral relations.