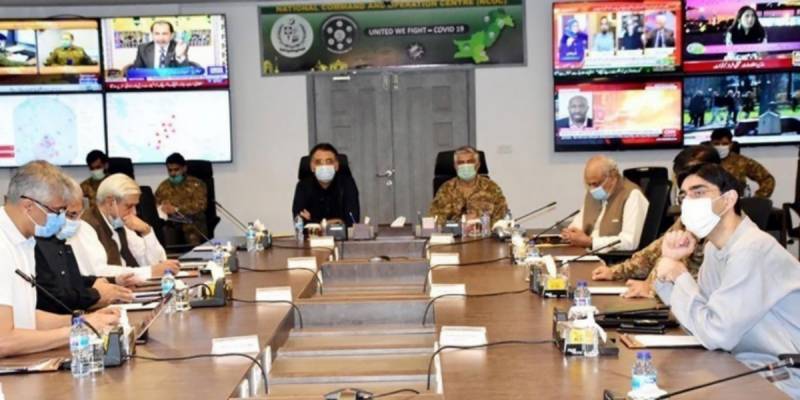 Islamabad (Staff Report/Agencies): The National Command and Operation Centre (NCOC) on Wednesday announced the lifting of a number of restrictions imposed to control the spread of COVID-19 in the country.

In a meeting, chaired by Federal Minister for Planning, Development and Special Initiatives Asad Umar and co-chaired by Lt General Hamood Uz Zaman Khan, announced reopening of educational institutions in districts where the positivity rate is less than five per cent and resumption of outdoor dining.

According to a press release issued after the meeting:

Tourism sector will be reopened under strict Covid-19 protocols from May 24.

Educational institutes in districts with less than five per cent positivity rate will be reopened from May 24.

Educational institutes in all districts will be reopened in a staggered manner from June 7.

All matric and intermediate exams will be held after June 20. All professional and non-professional exams will take place on a case-to-case basis as recommended by the Ministry of Education.

Outdoor marriage ceremonies will be allowed with a maximum of 150 people from June 1.

Outdoor restaurants will be opened daily till 11:59pm while takeaway will be allowed 24/7 from May 24.

Elective surgeries will be reopened from June 1.

However, certain restrictions will remain in place. These are:

All contact sports, festivals, cultural, musical and other events will be banned.

All types of indoor and outdoor gatherings, including religious events will be banned.

Inter-provincial public transport will remain suspended on the weekends from May 22.

All shrines, cinemas, amusement parks and indoor gyms will remain closed. Tracks for walking and jogging will be allowed to remain open with strict adherence to SOPs.

On Wednesday, the number of confirmed COVID-19 cases in Pakistan rose to 886,184 after 3,256 new coronavirus cases surfaced in the country during the last 24 hours.

As per National Command and Operation (NCOC), data 41,771 tests were conducted while positivity ratio remained 7.79%.