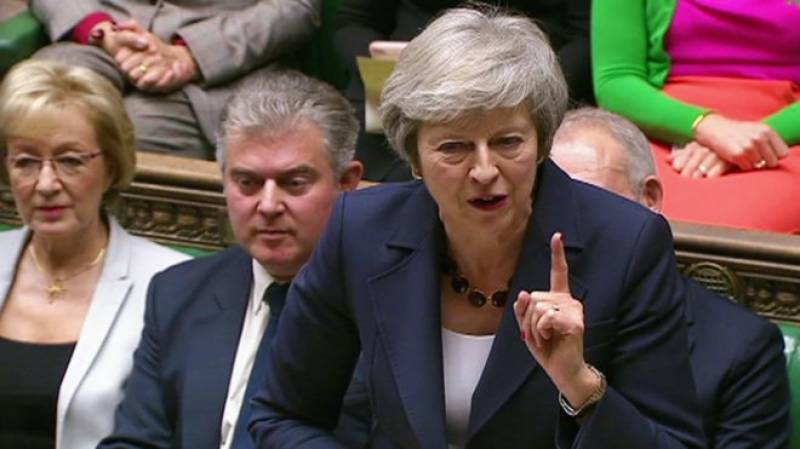 London (Agencies): British Prime Minister Theresa May has said that her removal might affect Brexit negotiations.

Since unveiling a draft divorce deal with the European Union on Wednesday, May’s premiership has been thrust into crisis by the resignation of several ministers, including her Brexit minister, and some of her own members of parliament are seeking to oust her.

More than two years after the United Kingdom voted to leave the EU, it is still unclear how, on what terms or even if it will leave as planned on March 29, 2019.

May has vowed to fight on, but with both pro-EU and pro-Brexit lawmakers unhappy with the draft agreement, it is not clear she will be able to win the backing of parliament for it, raising the risk Britain leaves the EU without a deal.

“These next seven days are going to be critical, they are about the future of this country,” May told Sky News. “I am not going to be distracted from the important job.

“A change of leadership at this point isn’t going to make the negotiations any easier ... what it will do is mean that there is a risk that actually we delay the negotiations and that is a risk that Brexit gets delayed or frustrated.” To trigger a confidence vote, 48 of her Conservative lawmakers must submit a letter to the chairman of the party’s so-called 1922 committee, Graham Brady.

More than 20 lawmakers have said publicly that they have submitted a letter, but others are thought to have done so confidentially. Brady told BBC Radio on Sunday the 48 threshold had not yet been reached.

Brady said he thought it was likely May would win any confidence vote, making her immune to another challenge for 12 months under the party’s rules.

Mark Francois, one lawmaker who has submitted a letter, said he expected some colleagues were taking soundings from local party members in their constituencies over the weekend before deciding whether to submit a letter.

At the centre of concerns over the deal is the Northern Irish backstop, an insurance policy to avoid a return to border checks between the British province and EU-member Ireland.

Critics say it would leave Britain bound to the EU in perpetuity and risks dividing the United Kingdom by aligning Northern Ireland more closely with the EU’s customs rules and production standards than mainland Britain.

They are also unhappy that this arrangement, although temporary, will form the basis on which arrangements for the future relationship between the EU and the UK are built.

The pro-Brexit ERG group of Conservative members of parliament published its assessment of the deal on Sunday, saying it would leave Britain “half in and half out” of the EU.