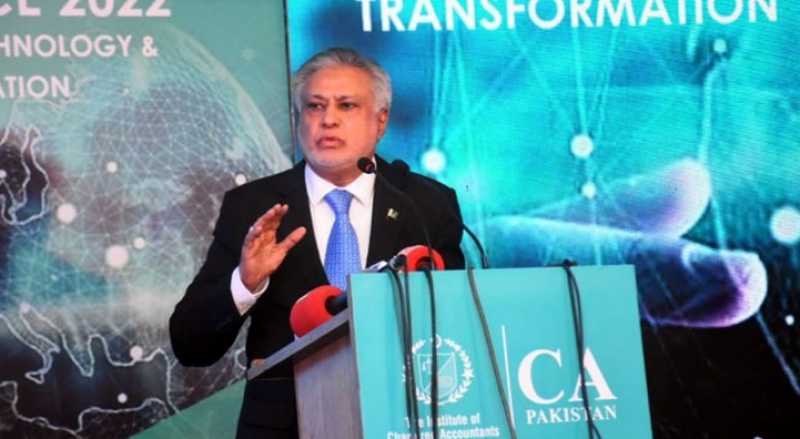 Islamabad: (Web Desk):Federal Minister for Finance Ishaq Dar once again gave a clear message on Wednesday that there was no question of Pakistan going into default as the same had been averted, though at a very high political cost.

"I want to give a message to markets through this conference… no need to get nervous, we are back to business, Insha’Allah we will arrange everything. Nothing is to worry," the minister said while addressing here the All Pakistan Chartered Accountant Conference.

He said Pakistan would be fine and nobody should have any problem because “Pakistan will not default”. There were serious challenges the country had been facing, however, the incumbent government had rescued it from default although it had to give a very high political cost.

“If there is a choice between state or politics, the priority should be the state and not the politics as if the country is there, there may be politics. If there is no county where there will be politics?” he asked.

Ishaq Dar said Pakistan would require around $32-34 billion to fulfill its liabilities and financial needs for the fiscal year 2022-23. “These include around $22 billion multilateral-level debt liabilities and around $12 billion current account deficit.”

He, however, vowed that the government would work hard to fulfill the sovereign guarantees to save the country’s pride.

Likewise, he also rejected the speculations about extending bond maturity dates beyond December 2022. Pakistan, he said, was a sovereign country so it should meet its obligations in time for its own credibility and honour.

He urged the chartered accountants to play their role and influence politicians to work for the betterment of national economy.

Ishaq Dar said Pakistan had deep challenges which were further increased by the devastating floods. He, however, was confident that everything would be corrected as was done back in 1998-99 and 2013, when the country was facing similar challenges.

He said in its last tenure, the Pakistan Muslim League-Nawaz (PML-N) government had put the economy on growth path and it was predicted that it would be become the 18th big economy, leaving behind Canada and Italy, however, due to political interest of some parties it could not be done.

Had the political parties joined the hands together, the country would have achieved the target of becoming the 18th big economy by 2026, however due to political instability, it now stood at 54th position, he lamented.

He had always favoured a ‘Charter of Economy’ that would help put the economy on a sustainable growth path, he remarked.

The minister said the PML-N assumed power in 2013 at a time when the country was facing serious macroeconomic challenges and its was predicted to be going in default in six to seven months.

However, the government fixed the problems and took the economy towards growth, he added.

"The whole world acknowledged the progress at that time while the country’s ratings went up, the Consumer Price Index (CPI) based inflation was recorded at 4 percent and food inflation at 2 percent,". Dar said, adding that the country had stable currency around Rs104 in parity with dollar and had reserves of around $26 billion.

Had that journey been allowed to continue, the country would have become the member of G20 club and 18th big economy, the minister said.