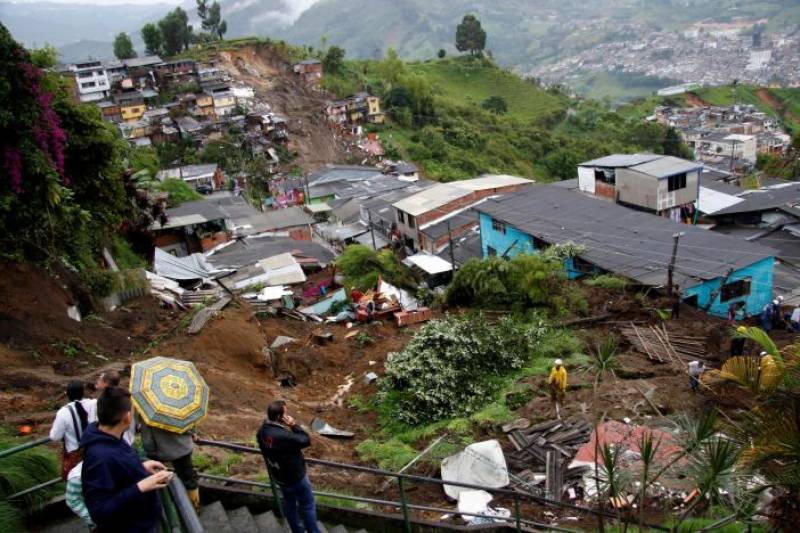 Manizales, Colombia (Reuters): At least 17 people were killed and seven are missing after a landslide sent mud and rocks crashing into several neighborhoods in Manizales, Colombia, the government said on Wednesday, the second deadly landslide in the country this month.

Recent heavy rains have endangered residents in dozens of provincial towns, where makeshift construction on the slopes of the Andes Mountains makes neighborhoods particularly susceptible to avalanches and flooding.

The landslide in Manizales, capital of coffee-growing Caldas province west of Bogota, followed a similar disaster in Mocoa, Putumayo earlier this month that killed more than 320 people and displaced thousands from their homes.

President Juan Manuel Santos said of the death toll after arriving in Manizales, "We are helping to find the disappeared ... and unfortunately the number will rise."

Rescuers from the Red Cross, civil defense, firefighters and armed forces are searching for the disappeared in the mud and debris of destroyed buildings.

Running water, electricity and gas services have been suspended in the areas affected by the landslides.

Transport Minister Jorge Eduardo Rojas said after meeting with the province's governor and the mayor of the city, "The situation in Manizales is very worrying. The toll is saddening."

The forecast is for at least another two days of rain in the area.

Even in a country where rains, a mountainous landscape and informal construction combine to make landslides a common occurrence, the scale of the Mocoa disaster far surpassed recent tragedies, including a 2015 landslide that killed nearly 100 people.