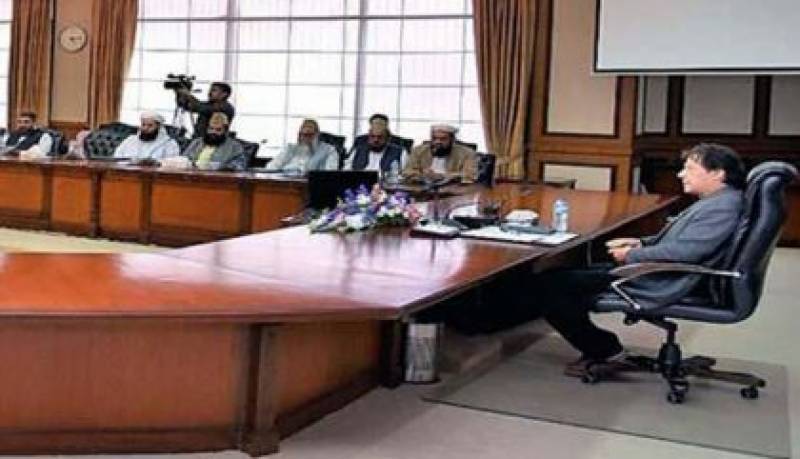 Islamabad (Staff Report/Agencies): A delegation of Ulema, in a meeting with Prime Minister Imran Khan, on Monday endorsed government’s strategy to tackle the coronavirus outbreak.

Talking to the media, Special Assistant to the Prime Minister on Information and Broadcasting Dr Firdous Ashiq Awan said the ulema also assured the PM of their complete cooperation to limit the spread of the novel coronavirus.

"We have to face and fight coronavirus. At the same time, we have to ensure that daily life continues to function. We, as a country, keep fighting the virus, unemployment and hunger — this is the thinking behind the prime minister's coronavirus strategy at the moment. And this strategy has been strongly acknowledged and endorsed by the respected ulema," Awan said.

“The ulema also appreciated prime minister's decision to reopen mosques during Ramazan, adding that they called his decision Islam friendly and humanity friendly,” she maintained.

Earlier on Saturday, the government and religious scholars reached consensus on conditional prayer congregations and opening of mosques in Ramazan.

President Arif Alvi, during the meeting with the country’s top religious scholars, expressed confidence that precautionary measures would be taken in mosques during Ramazan to limit the spread the virus.

Sharing details of the strategy, President Arif Alvi said the government will have the option of reviewing today's recommendations during Ramazan if it was felt that the precautionary measures are not being adhered to or that the number of coronavirus affected people have risen sharply.

President Alvi said it has been decided that no carpets will be laid in the mosques and Imam Bargahs and that the prayers will be offered on the floor with a distance of six feet between the people offering prayers.

The people are also required to make ablution at home and wash hands for twenty seconds with soap before leaving for the mosque with masks on their faces. They are also required to observe social distancing and refrain from any sort of gathering after the prayers. There will be no gatherings for Iftar and Sehr in mosques during Ramadan.

It was decided the floor of the mosques will be washed with chlorine added water.

For Namaaz-e-Taraweeh, it was decided that it will be offered within the premises of the mosques and not on the roads and foothpaths. It was also agreed that mosque courtyards will be used for prayers instead of halls.

The President said that children and people above the age of 50 as well as those suffering from any disease including flu, fever and cough will not come to the mosques for prayers. He said that Taraweeh can also be arranged at homes.

In the current circumstances, it was also recommended that people observe Aitakaf at homes.

President Alvi said that the administration of mosques will also establish committees in order to ensure implementation of these precautionary measures. He said the mosques' administrations and Imams will also stay in touch with the district and provincial authorities and fully cooperate with them.