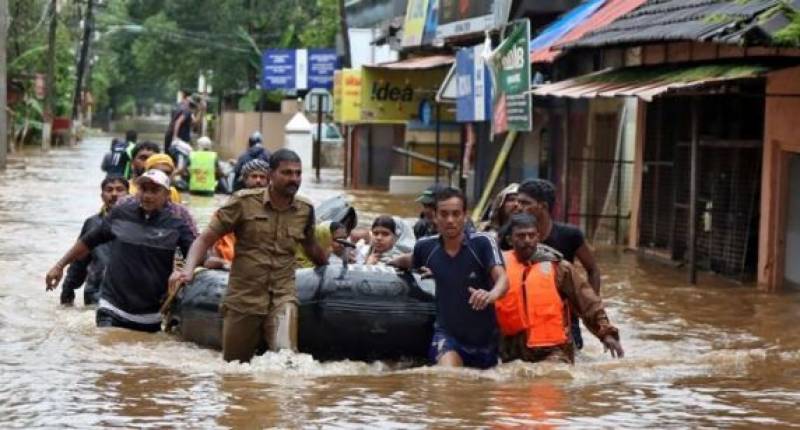 Kerala (Agencies): More than 800,000 people have been displaced in Kerala, as the death toll from the worst flooding to hit the southern Indian state jumped to at least 370, with losses to infrastructure pegged at almost $3 billion.

As the rains subsided on Sunday, relief efforts focused on rescuing those marooned in isolated places for days and airdropping supplies to others, police and officials said.

Kerala has been lashed by torrential monsoon rains since the end of May, triggering landslides and flash floods that have swept away entire villages. Incessant downpours since August 8 have killed more than 190 people and left thousands more stranded.

“In a matter of three to four days, we have been able to move nearly 850,000 people to shelters,” TM Thomas Isaac, Kerala’s finance minister, told the media.

“I think the total number of displaced persons, including those who have been moved to relatives’ or friends’ houses, would be well over 1.5 million,” he added in a phone interview from Alappuzha, Kerala.

On Sunday alone, 22,000 people were evacuated from their homes, but a large number of people continue to voluntarily live in flooded houses.

Thousands of army, air force and navy troops, along with the National Disaster Response Force (NDRF), are undertaking the search and rescue operations.

Fishermen from across Kerala have also come together to aid the relief efforts.

“The fisherfolk have played a very remarkable role,” said Isaac, Kerala’s finance minister. “About 500 fisheries boats have been at the forefront of the rescue and shifting operations.