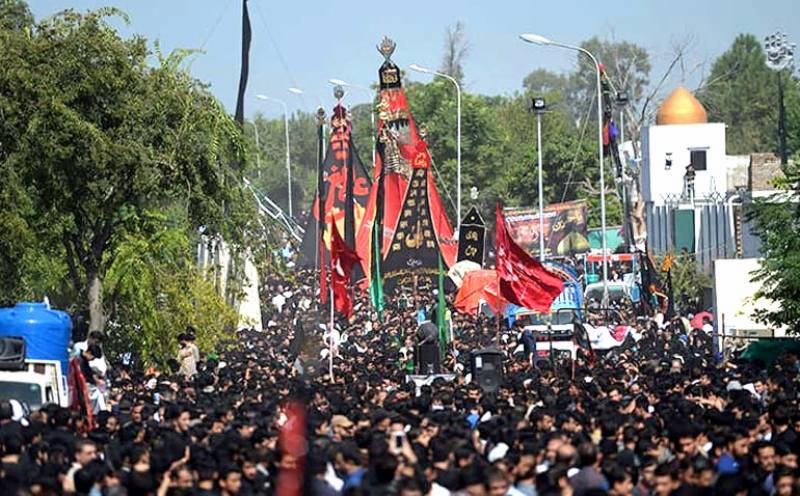 Islamabad/Lahore/Karachi (Staff Report/Agencies): Youm-e-Ashur, the 10th of Moharram, observed on Thursday across the country with due solemnity to pay homage to the supreme sacrifice rendered by Hazrat Imam Hussain (RA), the grandson of Prophet Muhammad (PBUH) and his companions at Karbala.

Muharram is the month of mourning for the seventh-century martyrdom of Hazrat Imam Hussain (RA). The mourning processions were taken out in all the cities and towns of the country. Strict security measures were in place to ensure foolproof security along the procession routes.

Mourning processions were taken out in various cities and towns, which passed through their traditional routes and culminated at their fixed points.

Ulema and Zakireen highlighted the bright and candid teachings of Hazrat Imam Hussain (R.A.) and various aspects of Karbla tragedy.

Sabeels of water, milk and tea had also been set up along the route of the procession.

In Lahore, main procession of 10th Muharram-ul-Haram was taken out from Nisar Haveli inside Mochi Gate and it culminated at Karbala Gaamay Shah.

In Rawalpindi, the central procession of Ashura emerged from Imambargah Col. Maqbool Hussain and culminated at Imambargah Qadeemi after passing through its designated route.

In Peshawar, the central procession of Ashura was taken out from Imam Bargah Agha Syed Ali shah Qissa Khwani Bazaar and after passing through its traditional route terminated at its starting point in the evening.

In Karachi, processions of 10th Muharram-ul-Haram were taken out from various parts of Karachi.

The main procession from Nishtar Park, after passing through the traditional route, culminated at Imam Bargah-e-Iranian Hussaini.

In Quetta, main mourning procession was taken out from Nichari Imambargah at Alamdar Road this morning and it culminated at starting point in the evening.

In Azad Jammu Kashmir, Tazia, Alam and Zuljinnah processions of Ashura were taken out in all major cities and towns including Muzaffarabad, Mirpur, Kotli, Bagh, Bhimber, Sudhanoti, Haveili, Rawalakot, and Neelam valley.

Youm-e-Ashur observed across Pakistan with due solemnity, reverence