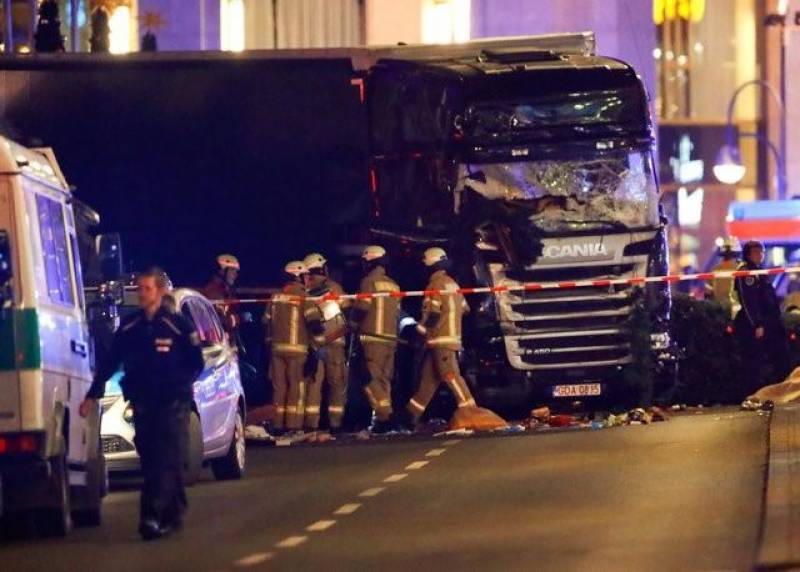 Berlin (Reuters): At least 12 people killed while 48 other injured as a truck crashed into a crowded Christmas market in central Berlin on Monday evening.

According to details, a black truck crashed into a crowded Christmas market on Breitscheidplatz square near the fashionable Kurfuerstendamm Avenue in the west of Berlin, Germany, causing massive destruction and casualties.

German media reported that the truck veered into the market around 8 p.m., normally a crowded time when adults and children would be gathering in the traditional cluster of wooden huts that sell food and Christmas goods in an annual celebration.

One suspect had been taken into custody and that another passenger from the truck had died as it crashed into people gathered around wooden huts serving mulled wine and sausages at the foot of the Kaiser Wilhelm memorial church in the heart of former West Berlin.

Police said that the nationality of the suspected driver, who fled the crash scene and was later arrested, was unclear.

German media cited local security sources as saying that there was evidence suggesting the arrested suspect was from Afghanistan or Pakistan and entered Germany in February as a refugee.

People at the market said that they heard a loud bang. A lorry (truck) crashed through the stalls, through people. The truck seemed to be traveling at about 40 mph (65 kph).

Black truck smashed the Christmas decorations. In the aftermath, it was resting lopsided on the pavement with a mangled Christmas tree beneath its wheels.

Berlin police said they were investigating leads that the truck had been stolen from a construction site in Poland.

Interior Minister Thomas de Maiziere said the circumstances of the crash were still unclear, adding: "I don't want to use the word 'attack' yet although a lot points to that."

The incident evoked memories of an attack in Nice, France in July when a Tunisian-born man drove a 19-tonne truck along the beach front, mowing down people who had gathered to watch the fireworks on Bastille Day, killing 86 people. That attack was claimed by Islamic State.

U.S. President-elect Donald Trump condemned what he called an attack, linking it to "Islamist terrorists" before German police officials had said who was responsible.

The White House on Monday condemned what it called "what appears to have been a terrorist attack".

German government officials have said the country, which accepted nearly 900,000 migrants last year, many from the war-torn Middle East, lies in the "crosshairs of terrorism."

A government spokesman said Chancellor Angela Merkel was briefed on the situation by de Maiziere and the Berlin mayor. Police said there were no indications of further dangerous situations in the area and urged people to stay away from the scene.

Ariel Zurawski, whose Polish freight company owns the truck, said the driver of the truck did not work for him.

Police cars and ambulances converged quickly on the scene.