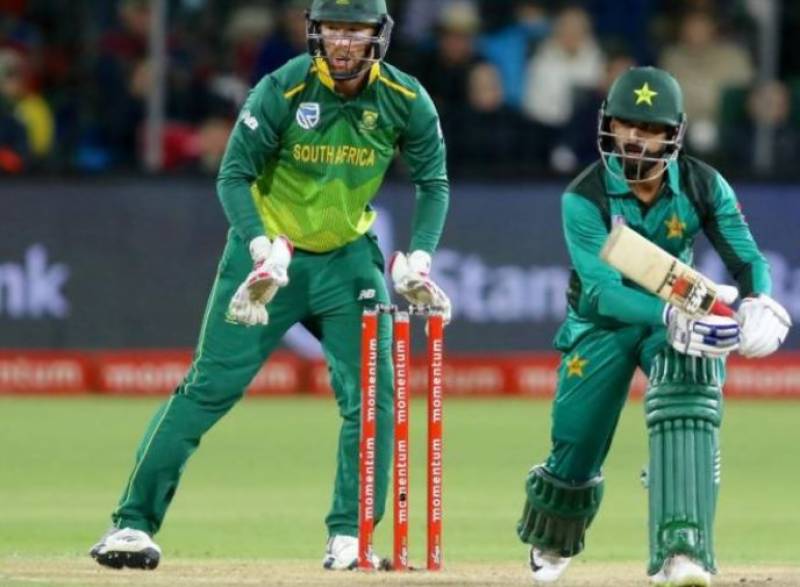 The hosts, after winning the toss, set 267 runs target for Pakistan in 50 overs.

Hashim Amla scored (108 not out) shared a second-wicket partnership of 155 with debutant Rassie van der Dussen (93) but the pair were unable to dominate against steady bowling on a slow pitch.

Hashim Amla and Reeza Hendricks put on a 82-run opening stand before the latter was dismissed, caught out by Hasan Ali from spinner Shadab Khan after scoring 45 off 67 after hitting five boundaries.

Then it was Amla and debutante Rassie van der Dussen’s time to take the innings forward. They put up a 155-run partnership on the second wickets.

Van der Dussen made 93 runs off 101 with six boundaries and three sixes to his name before he was caught at deep mid-off by Shoaib Malik off Hasan Ali’s bowling.

Amla remained unbeaten at 108 but could not provide South Africa with the impetus they needed to get closer to 300.

Pakistan started off the run chase of 267 well with Imam-ul-Haq and Fakhar Zaman taking the attack to the Proteas bowler. The duo put 45 on the first wicket before Zaman was caught at the boundary by Dwaine Pretorius off Duanne Olivier’s bowling.

Then Babar Azam entered the fray. He and Imam-ul-Haq scored 94 runs on the second wicket. Babar was cleaned up by Hendricks on 49 as he tried to cut an off-spin delivery.

The South Africans got a break as Imam-ul-Haq — lofting towards the off-side — was caught by Hendricks off Olivier’s bowling after scoring 86 off 101 with five boundaries and two sixes.

Two wickets fell in quick succession for Pakistan as Shoaib Malik dragged on a waist-high delivery to his middle stump after scoring 12 and leggie Imran Tahir trapped skipper Sarfraz leg before for just one.

Man of the match Mohammad Hafeez — who kept his cool when wickets were falling — scored an unbeaten 71 with the help of eight fours and two sixes to take the side to victory.