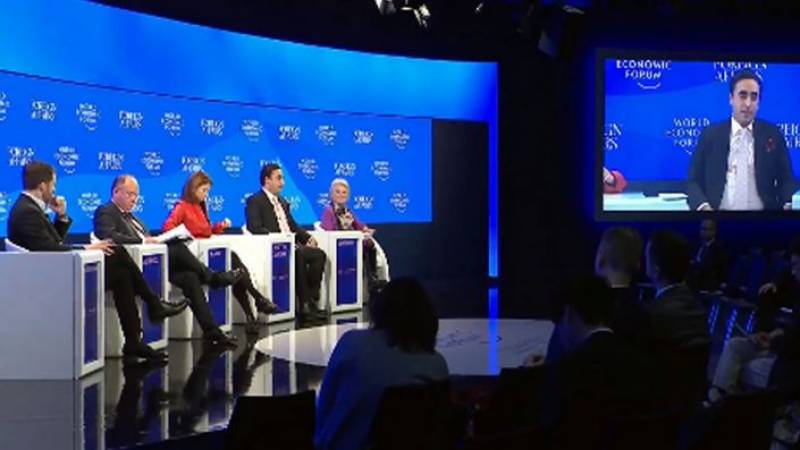 Davos (Web Desk): Foreign Minister (FM) Bilawal Bhutto Zardari on Friday said we hope that eventually the space will be created for dialogue and diplomatic engagement in order to resolve the Russia-Ukraine conflict sooner rather than later.

Speaking a dialogue session titled Security and Coordination in Davos, he said the prevailing disputes which have endangered the world would have been resolved amicably if the international institutions under the UN framework are working according to the needs of current era.

“There is need to see a more proactive approach from both Russia and Ukraine and also pursue diplomacy in the pursuit of peace,” FM Bilawal said.

Responding to the military element of this conflict, Bilawal Bhutto said diplomacy is the key thing that is missing in the entire issue.

FM Bilawal stressed that we should return to normative functioning of international institutions for the resolution of disputes and other challenges including climate change being faced by global community.

He called for revamping and restructuring of the international financial institutions to address complaints of global south.

Highlighting Pakistan’s experience of witnessing a long Afghan war in the neighbourhood, FM Bilawal said the conflict was ultimately resolved at the negotiating table.

“I feel we wasted time because, in 2002, the Afghan Taliban were willing to surrender and negotiate,” the foreign minister said. “But we did not take that offer seriously and had to do the same ten years later in 2022.”

Bilawal said repercussions of the war were not limited to Europe but extended to Pakistan in the form of high energy and food prices.

“As far as support for the UNSC resolutions, international law, and humanitarian crisis are concerned, we share the same views as the world,” the foreign minister said as he shared his views on the Russia-Ukraine conflict. “However, we don’t see the conflict as the first in its time where the UN resolutions were violated.”

FM Bilawal termed it ironic that UN laws were applied in Ukraine but not in Iraq.

“We find it sad that the UNSC resolutions that mean so much to Europe and West but are nothing more than the paper they were written on when it comes to India-Illegally Occupied Jammu and Kashmir,” he added.