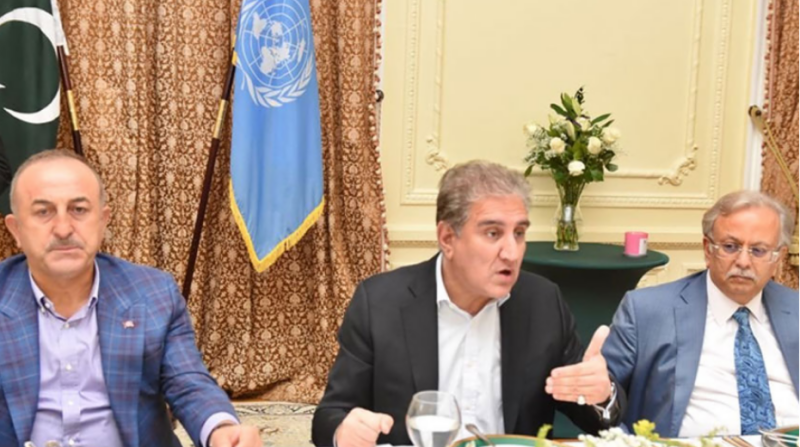 The foreign minister said this while speaking at dinner hosted by him at Pakistan Embassy in New York in the honour of the foreign Ministers who have arrived there to participate in United Nations General Assembly's (UNGA) emergency session on situation in Palestine.

FM Qureshi highlighted atrocities being committed by Israeli forces, the miseries of Palestinian people and threats to regional peace, and diplomatic efforts made by Pakistan in this regard.

Foreign Minister Shah Mehmood Qureshi, who is on a diplomatic peace mission, left for New York from Turkey on Wednesday to highlight the issue of Israeli atrocities in Palestine.

The foreign ministers of Palestine, Sudan and Turkey are also accompanying the Pakistani Foreign Minister.

Prior to his departure, FM Qureshi held a meeting with his Palestinian counterpart Riyad al-Maliki and exchanged views over evolving situation in the Palestine.

FM Qureshi will attend an emergency meeting of the UNGA and will draw the attention of the international community towards the ongoing Israeli aggression against the Palestinians.

He will urge the world body to play its due role in bringing an end to the atrocities.

The foreign minister will also hold important meetings with the UNGA president and other diplomats to highlight Pakistan's stance on regional and international issues, with a focus on the situation in Palestine.