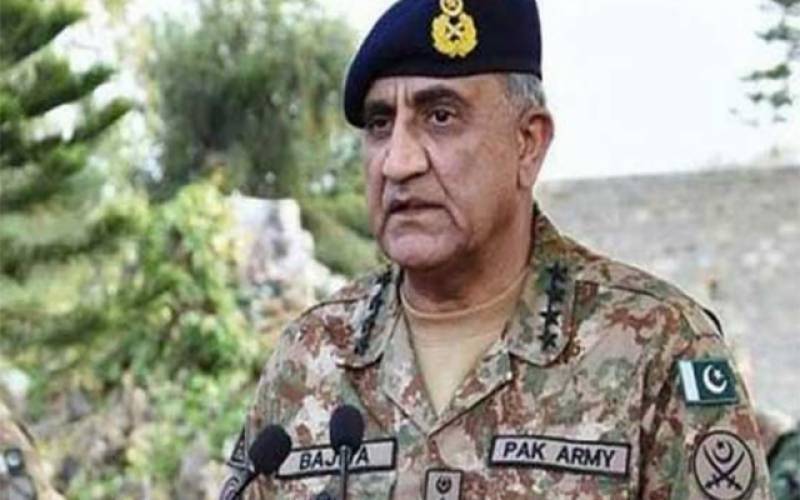 Rawalpindi (Staff Report/ Agencies): Chief of Army Staff (COAS) General Qamar Javed Bajwa on Tuesday said that Pakistan will continue to contribute towards peace in Afghanistan but honour and security of the country shall always stay premier.

According to a statement tweeted by Director General of the Inter-Services Public Relations (ISPR) Major General Asif Ghafoor, the COAS called on the world to acknowledge the military, economic, political and social costs paid by Pakistan in its successful fight against terrorism.

“Pakistan has successfully fought against terrorism while also contributing to regional peace. Pakistan has done much more for peace in Afghanistan than any other country,” he said.

“Pakistan has successfully fought against terrorism while also contributing to regional peace. Pakistan has done much more for peace in Afghanistan than any other country”, COAS. (1 of 2).

“We have paid the highest military, economic, political and social cost and the world should acknowledge that. We shall continue to contribute towards peace in Afghanistan but Pakistan’s honour and Pakistan’s security shall always stay premier,” the COAS added.

“We have paid the highest military, economic, political and social cost and the world should acknowledge that. We shall continue to contribute towards peace in Afghanistan but Pakistan’s honour and Pakistan’s security shall always stay premier” COAS. (2 of 2).

The statement by the army chief comes a day after US President Donald Trump's baseless allegation against Pakistan.

Earlier on Tuesday, Pakistan summoned the US envoy Paul Jones at the Ministry of Foreign Affairs in Islamabad to register a strong protest on “unwarranted and unsubstantiated allegations” made against Pakistan by US President Donald Trump.

Foreign Secretary Tehmina Janjua conveyed "her government's disappointment on the recent tweets and comments by the US president" and told the US charge d'affaires "that such baseless rhetoric about Pakistan was totally unacceptable", a statement issued by the FO read.

"Rejecting the insinuations about Osama Bin Laden, the foreign secretary reminded the US charge d'affaires that it was Pakistan's intelligence cooperation that provided the initial evidence to trace the whereabouts of OBL," it added.

Foreign Secretary told the US charge d'affaires that no other country had paid a heavier price than Pakistan in the fight against terrorism. The US leadership had acknowledged on multiple occasions that Pakistan's cooperation had helped in decimating the core al Qaeda leadership and eradicating the threat of terrorism from the region, FO further said.

"The US must not forget that scores of top al Qaeda leaders were killed or captured by active Pakistani cooperation. Pakistan's continued support to the efforts of international community in Afghanistan through ground/ air and sea lines of communication was unquestionably critical to the success of this Mission in Afghanistan," the statement added.

On Monday, Prime Minister Imran Khan, responding to Trump's statements, said that Washington assess its efficacy in the War on Terror in Afghanistan instead of making Pakistan a scapegoat for its failures.

He said that Islamabad had decided to "participate in the US War on Terror" although no Pakistani was involved in the 9/11 attacks.

“Instead of making Pakistan a scapegoat for their failures, the US should do a serious assessment of why, despite 140000 NATO troops plus 250,000 Afghan troops & reportedly $1 trillion spent on war in Afghanistan, the Taliban today are stronger than before,” Khan said in a series of tweet.

Calling Trump's tirade a lesson for Pakistani leaders "who kept appeasing the US esp after 9/11", the minister added: "Whether China or Iran, US policies of containment and isolation do not coincide with Pakistan's strategic interests."

While speaking to Fox News on Sunday, Trump had attempted to justify his administration's decision at the start of 2018 to pull "military aid" to Pakistan by linking it to Osama bin Laden being found in Pakistan in 2011. "They [Pakistan] don’t do a damn thing for us," the US president had said. Speaking of the compound in Abbottabad where bin Laden was found in 2011, Trump said the bin Ladens had been "living in Pakistan right next to the military academy, everybody in Pakistan knew he was there."

However, contrary to Trump's insinuations, former US president Barack Obama, the raid was carried out, had said last year: "We had no evidence that Pakistan was aware of his presence, that is something that we looked at."

Trump also added that the US used to give Pakistan $1.3 billion a year, but doesn't anymore. "I ended it because they don't do anything for us."