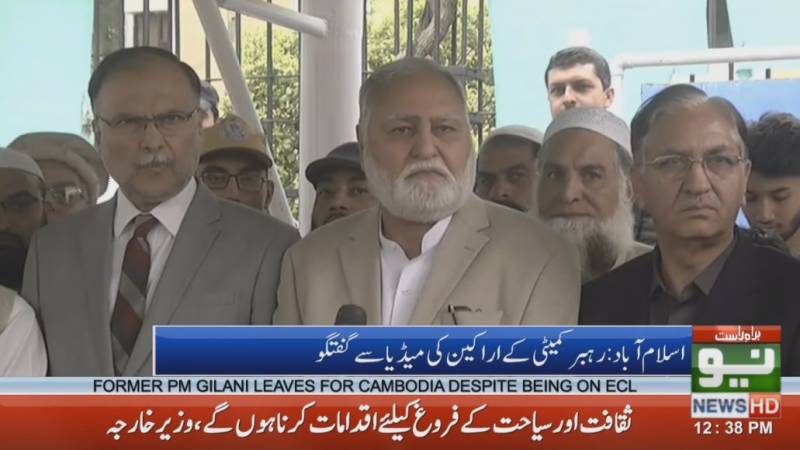 Islamabad (Web Desk): Rahbar Committee of the opposition parties on Wednesday submitted a memorandum to the Election Commission of Pakistan (ECP) and demanded daily hearing of the foreign funding case against Pakistan Tehreek-e-Insaf (PTI).

The document was submitted following a meeting of the Rahbar Committee with the secretary of the ECP.

Earlier, a meeting of Rehbar Committee was held after which they staged a protest outside the ECP.

Speaking to media outside the ECP office, Rahbar Committee convener Akram Durrani demanded that the case be heard on a daily basis.

"Even after five years the investigation against PTI was not complete", Durrani said.

PML-N leader Ahsan Iqbal said the Chief Election Commissioner was retiring next month and the PTI was hoping to end the formation of the Election Commission so that the proceedings will be ineffective. He added that the foreign funding case was the biggest scandal in the history of corruption.

Iqbal said that the money was sent into the PTI leaders accounts from US, Europe, India and the Middle East.

Speaking on this occasion, PPP leader Nayyar Bukhari said that the case has been pending for five years and the PTI sends in a new request at every opportunity.

ANP leader Mian Ifthikar Hussain said if the decision in the foreign funding case was announced, neither the prime minister nor his cabinet would remain.

“Wherever the prime minister goes he says there is too much corruption in the country. We will find out who is corrupt after the verdict of the foreign funding case,” the ANP leader added.

On October 10, the ECP rejected four petitions filed by the Pakistan Tehreek-e-Insaf (PTI) seeking secrecy during the scrutiny of its foreign funding sources.

A three-judge bench headed by Chief Election Commissioner Sardar Mohammad Raza had rejected the pleas, directing the scrutiny committee to continue its work. The commission also instructed PTI representatives to appear before the committee on October 14.

PTI’s founding member Akbar S Babar had filed the case in 2014, alleging that nearly $3 million in illegal foreign funds were collected through two offshore companies and that money was sent through illegal 'hundi' channels from the Middle East to accounts of 'PTI employees'.

The petitioner had also alleged that the foreign accounts used to collect funds were concealed from the annual audit reports submitted to the ECP.

The ECP commenced hearing on the petitions and formed a scrutiny committee in 2018 to investigate PTI’s foreign funding at the request of Akbar S Babar.