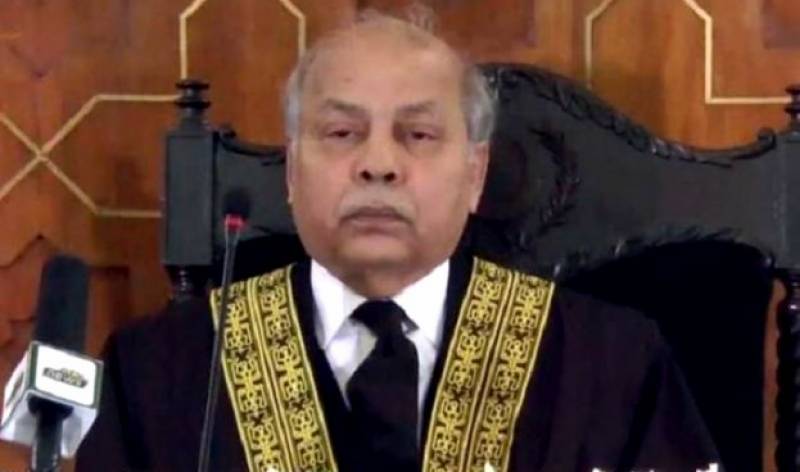 Lahore (Web Desk): Chief Justice of Pakistan (CJP) Gulzar Ahmed on Saturday dismissed the notion that the judiciary was being influenced by or taking dictation from other institutions.

Addressing a conference in Lahore held in memory of the late human rights activist and lawyer Asma Jahangir, the CJP made it clear that allegations that the judiciary was being influenced by powerful quarters do not sit well with him.

He was responding to comments made by former president of the Supreme Court Bar Association (SCBA), Ali Ahmad Kurd, who said that the judiciary was facing pressure from the ‘institutions’.

“The impression that the courts were not independent and were operating under the pressure of institutions is not correct,” CJP Ahmed said. “We are bound by oath. I have never taken pressure from any institution and never listened to anyone,” the CJP stressed.

“I never made a decision on anyone's request and no one has ever dared to say anything to me,” he reiterated.

The CJP further added that he had always made decisions according to justice and conscience.

“The court does what it wants to do. It does not do what anyone else wants it to. No one has ever dared to stop us,” he said. “Do not create misunderstandings among the people, do not create chaos and do not lose trust in the institutions, tell me whose dictation has been decided?”

“There is rule of law in Pakistan, not some individual’s. We will continue to work the way we have been.

“We will support and promote the Constitution, law and democracy in the country and we will not accept any undemocratic setup. We will quit [if forced to do so] and we have done this before.

"That should be enough for today," he concluded.

CJP Ahmed further said that all the judges of the Supreme Court, high courts and lower courts were working hard to provide justice to the people.

In his speech, Ali Ahmad Kurd said that there was a "clear and observable division" within the judiciary, adding that the country's "intellectual class was finished" and "because there is no intellectual class, people of small stature are sitting at the top."

Justice Minallah expressed his gratitude towards Kurd because "it is very important for us to know what the bar and what the people think about us."

"Let me assure Mr Ali Ahmad Kurd that no judge who is independent can ever make an excuse that he can be pressurised or influenced. Any such excuse ... I'm afraid ... is a violation of the oath," he said.

The IHC chief justice said judgements in cases such as the Mohtarma Nusrat Bhutto case and the Zafar Ali Shah case were part of history and could not be erased.

"These judgements were responsible for the making and enabling of those that have been referred to by Mr Ali Ahmad Kurd," Justice Minallah noted.

The IHC CJ said that the judicial organ could not afford to "bury its head in the sand and ignore its mistakes".