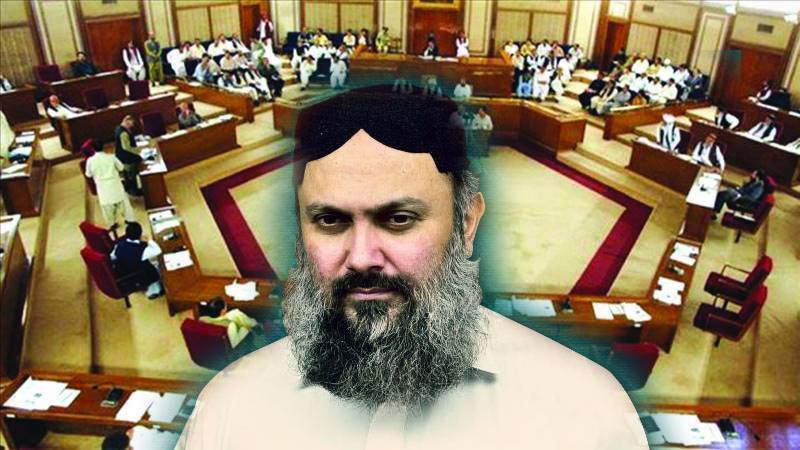 Out of 65 members, 33 supported the motion, which is also the number of lawmakers required to pass the motion when it is put up for voting.

As per the Constitution, a no-confidence motion needs the signatures of 20 per cent of the make-up of the legislative body to be tabled for discussion and half the members must vote in favour of it to be passed.

Reading from the motion, Khetran said that the performance of government institutions had been negatively affected during the chief minister's three-year tenure while unemployment had also spread.

Khetran demanded the release of the five missing lawmakers with immediate effect and said that the assembly has lost its confidence in Kamal.

“We demand Jam Kamal immediately step down from the post of the chief minister,” Khetran said, adding that due to the poor governance of the Balochistan CM, the province had to witness hopelessness, disrepute, and unemployment, while the performance of different departments was also adversely affected.”

He said that CM Kamal, assuming that he is the wisest of all, had been taking all decisions related to the province on his own.

“Running important matters without consultation has caused irreparable damage to the province,” Khetaran maintained, adding that owing to that, assembly members demand Jam Kamal step down from his post.

In his views, Leader of the Opposition in Balochistan Assembly Malik Sikandar Advocate said that the post of the chief executive is very important as it requires the incumbent to work tirelessly for the welfare of the people.

“Insurgency was supposed to be reduced in Balochistan but the opposite happened and it saw a surge,” Baloch said, adding that the charge sheet against CM Jam Kamal is “very long.”

Reacting to Jamali’s statement, the Balochistan chief minister said these people have been playing games in the province for a long time.

In his tweet, the chief minister said, “Balochistan must be a game for Jan Jamali but not for Jam Kamal.”

Prior to the assembly session, CM Jam Kamal spoke to the media and said that he is confident of the outcome of the no-trust motion, adding that the Opposition wants to create discord among government members.

Praising his rule as the chief minister of the province, Jam Kamal said that he has "worked hard to establish peace and harmony in the province," therefore, he would not let the Opposition spoil the accomplishment.

He said that the disgruntled members will present their arguments against me today, while the speaker of the assembly will decide a date for the actual voting to take place.

"We are confident that the reality will be revealed on the polling day," CM Balochistan said.

"The voting could take place three to seven days from now on, but during this time, we will not let anyone disturb the peace of the province," Kamal said.

On October 14, Jam Kamal had refused to step down as the chief minister of Balochistan after he held a meeting with Prime Minister Imran Khan amid the deepening political crisis in Balochistan.