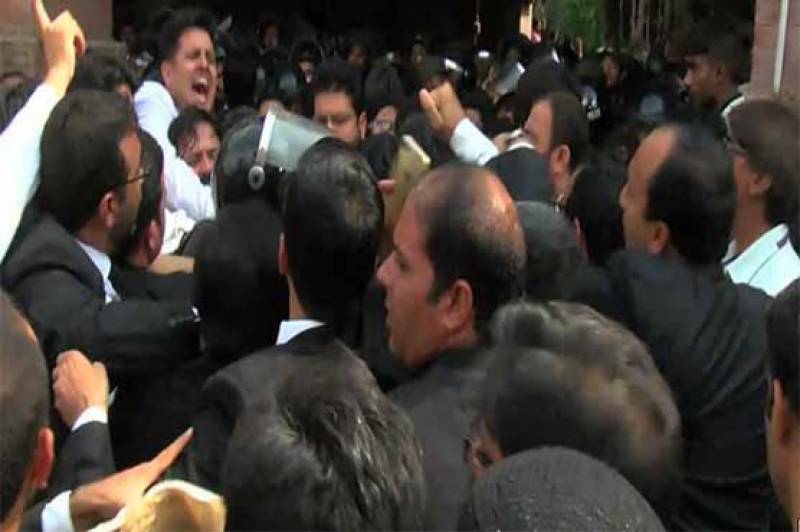 According to details, members of the legal fraternity are pelting stones at the LHC building and police personnel protecting it.

During the hearing, the LHC chief justice directed the police to arrest Qureshi and his secretary and produce them in court after they failed to appear despite repeated summons in the contempt of court case.

The bench also ordered the suspension of the lawyers’ licences. The chief justice observed during the hearing that the sanctity of the court is supreme and there will be no compromise on it.

As a result, lawyers loyal to Qureshi attempted to break into the chief justice’s courtroom and broke down a gate in protest. The lawyers are also chanting slogans against the LHC chief justice.

City police and Rangers have cordoned off the entrance to the courtroom and a tussle between the two sides is under way.

Authorities used a water cannon to disperse the protesting lawyers while members of the legal fraternity are pelting stones at the LHC building and police personnel protecting it.

Sources said the protesting lawyers include bar members from Multan, Burewala and other areas.

In an incident on July 24, Qureshi and another lawyer, along with a few others, allegedly misbehaved with Justice Muhammad Qasim Khan and obstructed judicial proceedings of his court at the Multan bench. They had also allegedly vandalised and ransacked the court premises and ripped off the name plate of the judge.

Expressing displeasure over the lawyers’ behaviour, the LHC chief justice had stopped the judges from working for the Multan bench. The incident also led to the boycott of courts of the region by lawyers’ bodies.