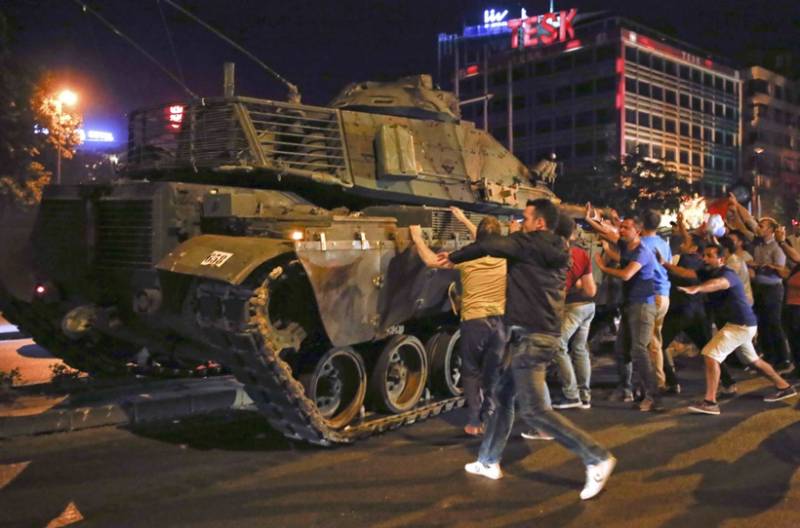 Ankara: Last year coup attempt in Turkey may be a failure but the trial of the alleged suspects is still going on. More than 5000 army personnel are behind the bars since then. In a recent development a mass trial of more than 50 suspects have been started and the allegation is “ To assassinate the Turkish President”

Forty-four suspects, mainly soldiers, are under arrest over the alleged plot to kill Recep Tayyip Erdogan, while three others still on the run are being tried in absentia at the court in the southern city of Mugla.

The suspects, several smartly dressed in suits and ties, were led into the court by security forces in front of television cameras.

Onlookers heckled the accused as they stepped out of the buses that took them from prison, shouting “we want the death penalty!” and “Allahu Akbar” ( “God is Greatest “).

The trial was taking place under the highest security with snipers posted on rooftops and helicopters circling overhead.

Erdogan, who was holidaying at a hotel in the upmarket Aegean resort of Marmaris with his family on the night of the coup, has said the plot left him 15 minutes from death.

Turkish officials say the bid to kill Erdogan was a key part of the plan to depose the elected government they allege was masterminded by the US-based Muslim cleric Fethullah Gulen and his so-called Fethullah Terror Organisation (FETO).

One of the most senior soldiers on trial, former brigadier general Gokhan Sahin Sonmezates, denied any link to Gulen, describing his organisation as a “perversion”.

Sonmezates claimed he believed he was part of an action by the Turkish army. “My motivation was to protect my country,” he said.

A second suspect, major Sukru Seymen, dramatically admitted in court: “Yes, I conducted a coup”, adding, “even if I get the death penalty, it won’t hurt me.” He also insisted he was not a Gulen follower, but an admirer of Turkey’s secular founder Mustafa Kemal Ataturk.

The trial was being held in a conference centre rather than a standard courtroom to accommodate the high number of suspects.

Inside, suspects were placed at the centre surrounded by dozens of soldiers with batons. The initial phase should last until March 15.

Prosecutors have sought multiple life sentences for each of the 47 suspects, who include an alleged “hit squad” of 37 soldiers.

Many were detained hiding in the mountains above Marmaris, even in caves, in the days after the coup bid that left 248 dead not including the plotters.

Turkey has hit out at claims that the plotters’ failure to eliminate Erdogan raises questions about the seriousness of the plot, insisting that the president was targeted by a potentially lethal conspiracy.

Accompanied by close family members including his son-in-law, Energy Minister Berat Albayrak, Erdogan had managed to flee Marmaris and fly to Istanbul where he oversaw the suppression of the coup.

Two Turkish policemen who were helping to guard Erdogan at the hotel were killed, according to the indictment.

The plan was to “neutralise the president,” Erdogan’s lawyer Huseyin Aydin said outside the court.

“If our president was neutralised as planned... we would have been faced with a different Turkey,” he said.

Onlookers waving Turkish flags chanted slogans against the accused and Gulen, including “Execution!” and “Game Over, FETO”.

After the coup, there have been calls to reimpose the death penalty in Turkey, which was abolished in 2004. Its reinstatement would spell the end of Turkey’s embattled bid to join the European Union.