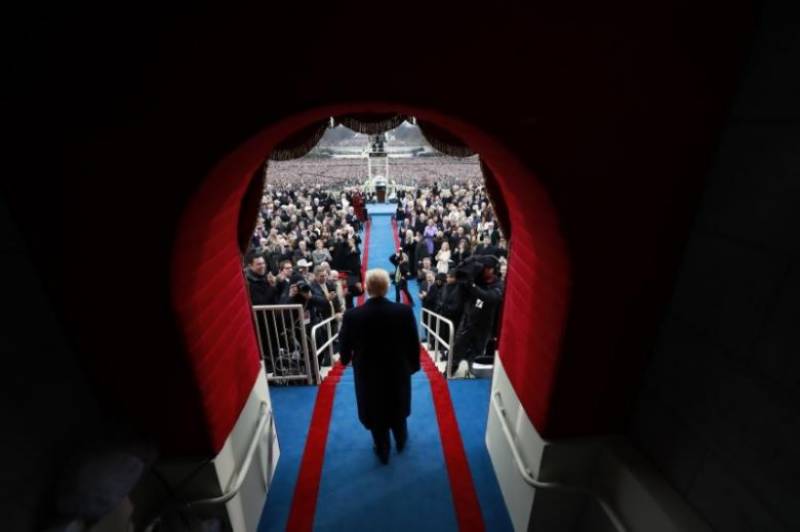 Washington (Reuters): Republican Donald Trump took over as U.S. president in the same manner he conducted his upstart election campaign on Friday, with a mixture of blustery salesmanship and naked contempt for the established political order.

In doing so, he sent a clear signal to the country and the world: He plans to govern as he campaigned, refusing to align himself even with his own Republican Party and taking his message directly to the American people.

He did nothing to dispel concerns that he would bring the cult of personality he built over the election campaign into the White House, and he offered little in the way of olive branches to the tens of millions of Americans who did not vote for him in the most divisive election in modern U.S. history.

"The American carnage stops right here and stops right now," he pledged, as he presented himself as a champion of the ordinary American.

The gloomy picture Trump sketched of the nation flies in the face of evidence that the economy is in healthy shape, crime is down and the nation is relatively safe and secure.

After warning the public on the extent of the problems, Trump suggested, as he did during his campaign, that he and his "movement" are the only solution. He did not mention the Republicans in Congress with whom he will partner to govern and certainly not the Democrats who have fiercely opposed him.

Trump campaigned as an outsider, railing against the sins of both his Republican Party and the Democratic Party. And, it became clear as he delivered his speech on the steps of the Capitol, that he intends to remain that outsider, the rebel leader who takes power with one foot still on the battlefield.

Continuing the populist themes from his campaign, he condemned the politicians who he said have for years prospered at the expense of the public.

He eschewed the high-flying rhetoric typical of such occasions in favor of more blunt, populist declarations.

"Politicians prospered - but the jobs left, and the factories closed," he said. "The establishment protected itself, but not the citizens of our country."

"We are transferring power from Washington D.C. and giving it back to you, the American people."

Aundrea Friedley, 52, of Nampa, Idaho, who was in the crowd watching his speech, likened it to a “powerful punch” and praised Trump for returning power to the people.

Trump won the majority of the U.S. Electoral College vote, but lost the popular vote to his opponent, Hillary Clinton, by nearly 3 million votes, making any attempt to unify the country that much more difficult.

"We assembled here today are issuing a new decree to be heard in every city, in every foreign capital and in every hall of power," Trump said. "From this day forward a new vision will govern our land. From this moment on, it's going to be America First."

His proposals though for ramped-up infrastructure spending, strong border controls and the strong isolationist tone of his speech may not jibe with traditional Republican priorities.

At the same time, however, Trump has assuaged nervous Republicans by selecting a Cabinet that has largely affirmed bedrock conservative principals, and he plans to quickly begin signing executive orders designed to roll back some of former President Barack Obama’s progressive policies.

In Trump's speech, historians said, there were echoes of Franklin D. Roosevelt with Trump mentioning "the forgotten" Americans left behind by the forces of trade and globalization, of Richard Nixon's "silent majority", and of Ronald Reagan’s pledge to restore the nation's greatness.

But, said Julian Zelizer, a historian at Princeton University, there was also "more anger physically and verbally than in the past" with Trump punctuating his speech with pointed hand gestures.

Trump spent little time trying to expand his appeal to the majority of Americans who view him unfavorably, according to opinion polls. Instead, he appeared to speak directly to his most fervent supporters.

His speech perhaps was most reflective of Reagan’s 1981 address, in which the then-president spoke of “economic affliction” and “idle industries.”But Reagan inherited an economy struggling with stagflation and an unemployment rate of 7.5 percent. By contrast, under the departing Obama, the economy has added private sector jobs in 80 consecutive months and the unemployment rate stands at 4.7 percent.

The picture painted by Trump "is probably not one that every American shares," said Thomas Alan Schwartz, a presidential historian at Vanderbilt University. Still, he said, Trump has tapped into a “sense of national crisis and decline.”

Belinda Bee, 56, came to see Trump from Mooresville, North Carolina, saying she believed he would successfully combat Islamic terrorism and that he would remain a political outsider.

“The country now belongs to the people and not the politicians,” she said.