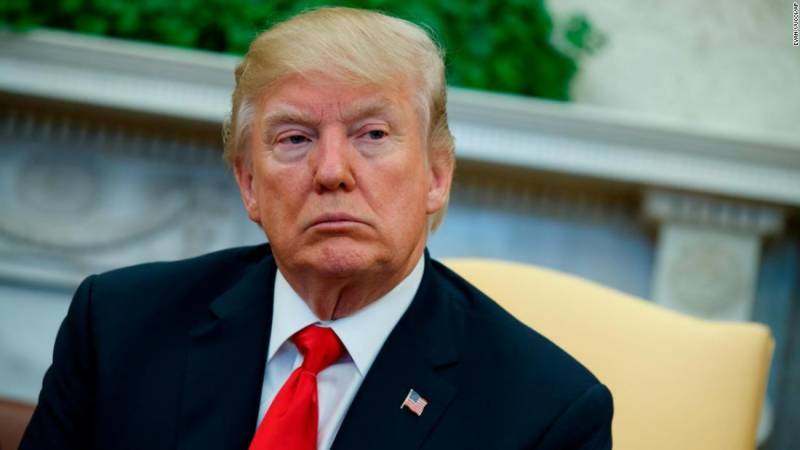 Washington: (Agencies): US President Donald Trump threatens to impose tariffs on an additional US$500 billion (S$684 billion) of imports from China, threatening to escalate the current trade clash with the Asian nation.

"We're down a tremendous amount," Mr Trump said in an interview with CNBC recorded on Thursday and broadcast yesterday. "I'm ready to go to 500."

"We've been ripped off by China for a long time," he added.

"I don't want them to be scared. I want them to do well," he said of China. "I really like President Xi (Jinping) a lot. But it was very unfair."

The threat is likely to put further strain on a trade dispute between the world's two biggest economies.

Earlier this month, the United States imposed tariffs on US$34 billion of Chinese imports. In return, China levied taxes on the same value of US products. A second tranche of US$16 billion in products is under review and could soon be added to the US measures.

The US$500 billion figure is about the value of Chinese goods imported into the US last year.

China imports far less from the US, buying about US$130 billion in American goods last year, so it does not have as much to leverage with tariffs, but it could use other measures to hit trade such as tightening regulatory oversight.

Both the Dow Jones and S&P stock index futures, already down on trade worries, fell further after the interview.

When asked about the stock market possibly falling if the US imposes duties on such a large amount of goods, Mr Trump said: "If it does, it does. Look, I'm not doing this for politics."

Mr Trump wants Chinese leaders to take action that would lower the US$375 billion goods trade deficit that the US is running with China. The administration has also accused China of engaging in unfair trade practices by forcing American investors to turn over key technologies to Chinese firms.

China's Ambassador to the US Cui Tiankai has refuted accusations by the Trump administration against China on trade, noting that only consultations based on mutual respect and trust will lead to a proper settlement of their dilemma.

In an article published in the daily USA Today on Wednesday, Mr Cui said the US' trade deficit with China does not mean it is "losing".

Rather, "thanks to the trade with China, American families have access to more, higher-quality, lower-cost products", Mr Cui said. "In just 2015, trade with China lowered prices in the US by up to 1.5 per cent, saving each family US$850 on average," he said.

Noting that "deficits are not products of ill-intention, nor are they necessarily bad for an economy", he added that China has never deliberately sought a trade surplus with the US.

The surplus, at the centre of US arguments against China, was not produced intentionally, since "the flow of trade is determined by the market", Mr Cui said. As for US accusations against the legal basis of China's counter-measures, Mr Cui said such remarks are no more than "a thief crying 'stop, thief'".

He added: "For great powers like China and the US, competition - even conflict - is natural. It is, however, vital for us to manage such competition in an effective and constructive way."

"Does the US government genuinely believe China would possibly yield to such unreasonable policy?" he asked. "Anyone familiar with Chinese history knows that 'maximum pressure' doesn't work for our nation."

The International Monetary Fund warned earlier this week that escalating trade tensions are threatening to derail a global upswing.

If threatened trade barriers become reality, global output could drop by about 0.5 per cent below its projected level by 2020, IMF chief economist Maurice Obstfeld said.