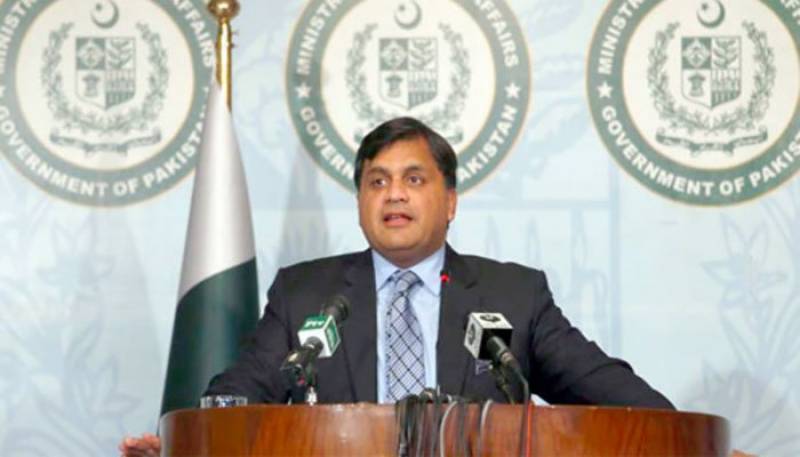 In his weekly news briefing in Islamabad, the FO spokesperson said that India has converted occupied Kashmir into the world’s biggest prison with the ongoing curfew and communications blackout, after the Narendra Modi government abolished the special status granted to the disputed valley.

“More than 14 million people are incarcerated in their homes and said Indian government has stationed more than 0.9 million troops in the valley and Kashmiris are being denied access to any form of communication,” Dr Faisal said.

He added that a humanitarian crisis is looming as occupied Kashmir is facing the shortage of food and medicines.

“The aggression exhibited by India posed a danger to regional peace, and called on the international community to take notice of the atrocities being perpetrated by Indian troops in occupied Kashmir”, the FO spokesperson said.

He said that the demonstrations around the world against Modi government’s policies will continue. Until when will India continue the curfew? The [lockdown] will have to end one day,” Dr Faisal said.

The FO spokesman said that Pakistan was holding consultations for approaching the International Court of Justice (ICJ) over the widespread human rights abuses in occupied Kashmir.

The spokesperson expressed concern over suspension of hundreds of Twitter accounts belonging to Pakistani users after they wrote posts in support of Kashmir. “We are deeply concerned over the [reports] of suspended accounts and we are raising the issue with the relevant companies,” he said.

A number of journalists, activists, and government officials have claimed that their accounts were suspended after they tweeted in support of Kashmir freedom. #StopSuspendingPakistanis began trending on Twitter in Pakistan earlier this week.

The FO spokesperson added that the Wagah border was open, and if anyone needed any help they could contact the Pakistan Foreign Office.

He said that Pakistan strongly condemns the unprovoked ceasefire violations at the Line of Control (LoC) by India that martyred a number of people.

Dr Faisal said Pakistan will approach every forum in the world against India’s actions in occupied Kashmir.

Responding to a question, Dr Faisal said there is no organized presence of Daesh in Pakistan. He said Pakistan is however concerned over the outfit's rise in neighboring Afghanistan.

Pakistan condemns terrorism in all its forms and manifestations, he said, adding that the country will continue its efforts to maintain peace and stability in the region.

Responding to another question regarding Afghan peace process, the spokesperson said that Pakistan has sincerely supported international efforts for peace and stability in Afghanistan as part of a shared responsibility.

“Pakistan believes that a final and durable solution in Afghanistan will be victory for the Afghans, the regional countries and the international community but it should be fully led and owned by Afghans,” the FO spokesperson said.