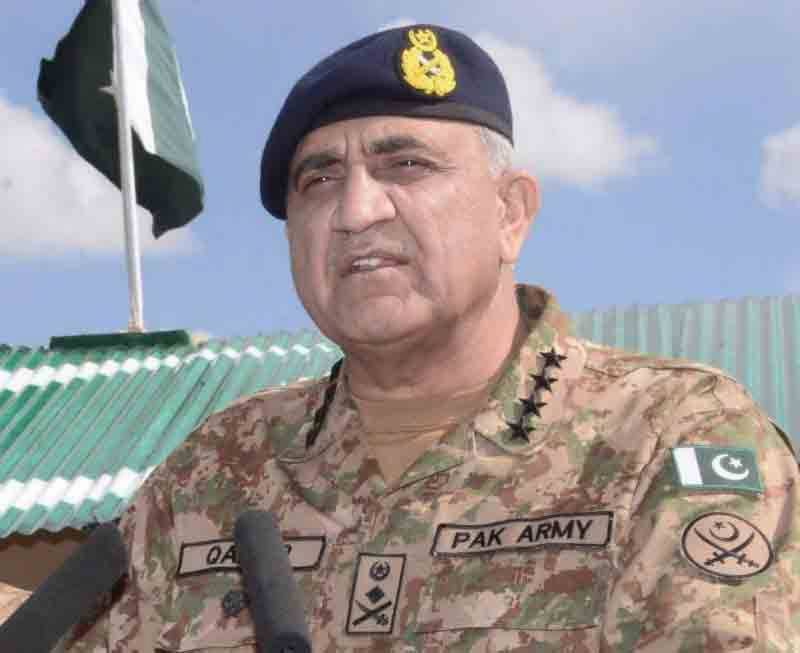 Karachi (Staff Report/Agencies): Chief of Army Staff (COAS) General Qamar Javed Bajwa on Saturday said that the new government has extended a hand of peace and friendship towards India with utmost sincerity but it should not be taken as our weakness.

According to a communique issued by the Inter-Services Public Relations (ISPR), the army chief, speaking at the passing out Parade of 110th Midshipmen and 19th Short Service Course held at Naval Academy, Karachi, said: “the new government has extended a hand of peace and friendship towards India with utmost sincerity but it should not be taken as our weakness, peace benefits everybody. It is time to fight against hunger, disease and illiteracy, then to fight against each other.”

He said that wars bring death, destruction and misery for the people. Ultimately, all issues are resolved on the table through negotiations.

The COAS said that the relative peace present in the country today has been achieved after tremendous sacrifices to restore peace and order.

“It is now our duty to honour their sacrifice through display of Unity, Faith and Discipline in everything that we do. Let us all start the transition from conflict to progress, through commitment to the ideals of Allama Iqbal and Quaid-e-Azam. This is the minimum that we can do for our beautiful country,” he said.

General Bajwa said that the country’s young cadets should take the country along the lines of developmental perspective than a security perspective.

“Survival in the difficult times has given us the confidence that we have the will and capacity to endure. Nobody can threaten us or our freedom. It is time we fulfill our dreams and make Pakistan a great country,” he said.

The COAS reminded the cadets that the country is yet to get out from terrorism and an unannounced war.

“Like the terrorists before; the protagonists of the new threats are at times, our own people. Mostly misguided by ambitions, blinded by hate, ethnicity or religion or simply overawed by social media onslaught, some of our own boys and girls readily fall victim to such dangerous or hostile narratives,” he added.

“The response to such onslaughts or threats cannot always be kinetic in nature. You will have to deal with them in cognitive domain by producing or propagating a superior narrative, but this can only happen if you have developed the ability to handle unwarranted criticism with patience and possess better intellectual skills to respond to such threats with logic and reasoning.”

The army chief reviewed the parade and gave away prizes to distinguish performers.