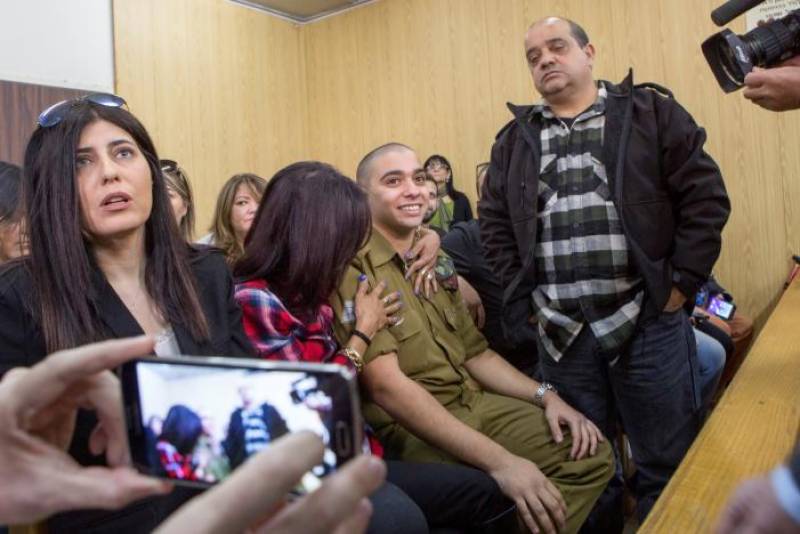 Tel Aviv (Reuters): A young Israeli soldier who killed a wounded and incapacitated Palestinian assailant was sentenced to 18 months' imprisonment on Tuesday, in a show of leniency that drew Palestinian outrage after one of the most divisive trials in Israel's history.

Eleven months ago, Sergeant Elor Azaria was serving as an army medic in the town of Hebron in the occupied West Bank when two Palestinians stabbed and wounded another soldier. One of the assailants was shot dead by troops. The other was shot and wounded. Eleven minutes later, as the wounded man, Abd Elfatah Ashareef, 21, lay on the ground unable to move, Azaria, then 19, took aim with his rifle and put a bullet in his head.

With the 50th anniversary of Israel's wartime capture of the West Bank approaching, the trial generated debate about whether the military, in accusing Azaria of violating open-fire rules and its ethical code, was out of touch with a public that has shifted to the right in its attitudes towards the Palestinians.

In one poll, nearly half of Israeli Jews said any Palestinian attacker should be killed on the spot. A three-judge military court convicted Azaria of manslaughter last month, a crime that carries a maximum 20-year term. Prosecutors had asked for a three-to-five year sentence, noting the soldier had shot an assailant who had carried out an attack only minutes earlier.

Passing an 18-month sentence, the court said Azaria, whom it demoted to the rank of private, had "taken upon himself to be both judge and executioner" and had not expressed regret for his crime.

But it said it was passing a lighter sentence than requested partly because it had been Azaria's first combat experience and his record had been unblemished up until then. Nonetheless, Ilan Katz, one of Azaria's defense attorneys, said they would appeal the manslaughter conviction.

"They are laughing at us," Ashareef's father, Yusri, told Reuters after the sentence was announced. The Palestinian government said the decision gave Israeli soldiers a "green light" to carry out "executions" without fear of real punishment.