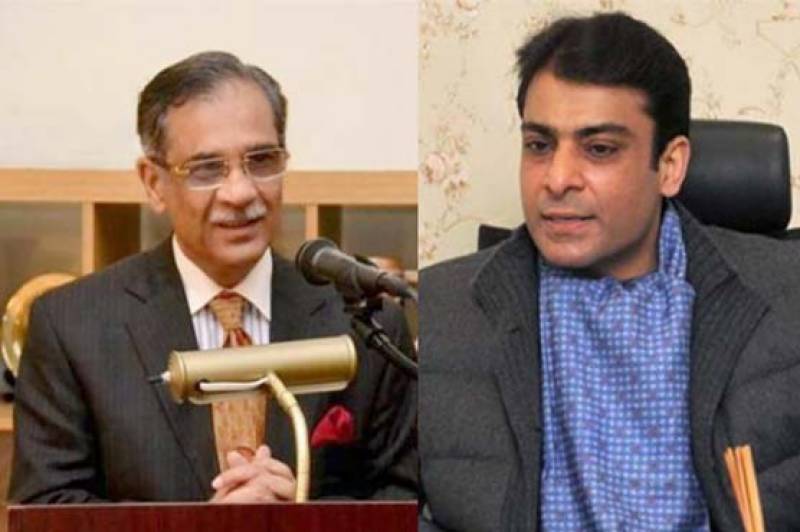 Lahore (Staff Report): Chief Justice of Pakistan (CJP) Mian Saqib Nisar has questioned “who is Hamza Shahbaz, I don’t know anyone by this name”.

While hearing a suo moto case regarding blocking of roads outside the Lahore residence of Punjab Chief Minister Shehbaz Sharif and MNA Hamza Shahbaz, the chief justice expressed displeasure over non-compliance of his previous orders and asked Punjab Chief Secretary Zahid Saeed why the barriers have not been removed yet, adding that if someone feels so much threatened at a place then he should consider moving to someplace safer.

The provincial secretary briefed the court that the gate on the main road had been removed, “now only barriers have been placed to provide security, as there is a threat to the life of Hamza Shahbaz”.

Upon this the CJP questioned, “who is Hamza Shahbaz, I don’t know anyone by this name.” He was briefed by the chief secretary that Hamza Shahbaz is an MNA and son of Punjab Chief Minister Shahbaz Sharif.

CJP Nisar then said that Hamza should appear before the court and brief about the threat. “If there is so much threat to their lives in living here, these people should shift their residence.”

The chief justice ordered the provincial chief secretary to ensure the removal of barriers, and said that he would personally visit the place in a private vehicle to see whether his orders have been implemented or not.