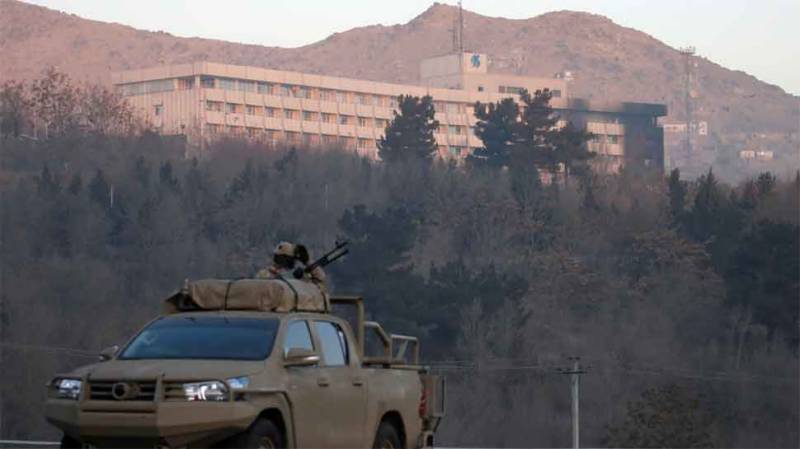 Kabul (Reuters): Gunmen in army uniform, who stormed Kabul’s Intercontinental Hotel late on Saturday and battled Afghan Special Forces through the night, killed more than 30 people and wounded many more, although the final toll might still be higher.

Wahid Majroh, a spokesman for the ministry of public health, said on Sunday that 19 bodies had been taken to hospitals, with six identified as foreigners.

However, an Afghan security official said the death toll was over 30 and might climb higher. The dead included hotel staff and guests as well as security personnel who fought the attackers. All the five attackers were also killed, interior ministry spokesman Najib Danesh said.

Pakistan condemned the attack and expressed grief over the loss of precious lives.

A statement on the website of Foreign Ministry said: “The government and the people of Pakistan convey solidarity and support with the government and people of Afghanistan at this dastardly terrorist attack. We convey our deepest sympathies for those who have lost their loved ones.”

Separately, Foreign Office spokesperson Mohammad Faisal tweeted, “We reject the knee jerk allegations by some Afghan circles to point the finger at Pakistan for the terrorist attack on intercontinental hotel in Kabul. There is need for a credible investigation into the attack, including on reported security lapses”.

“We reiterate our strong condemnation of terrorism in all its forms and manifestations. In our view, cooperation among states is important for effectively combating and eliminating the scourge of terrorism,” the Pakistan foreign ministry said.

The raid was the latest in a series of attacks that have underlined the Afghan capital’s vulnerability and the ability of militants to mount high-profile operations aimed at undermining confidence in the Western-backed government.

More than 150 guests were able to flee as parts of the building caught fire, with some shimmying down sheets tied together and dropped from upper-floor windows and others rescued by Afghan forces.

Local airline Kam Air said around 40 of its pilots and air crew, many of whom are foreigners, were staying in the hotel and as many as 10 had been killed. Local media reported the dead included Venezuelans and Ukrainians.

The Taliban, who attacked the same hotel in 2011, claimed responsibility for the attack, its spokesman Zabihullah Mujahid said in a statement.

A statement from the interior ministry put the blame on the Haqqani network, a group affiliated with the Taliban that is notorious for its attacks on urban targets.

Abdul Rahman Naseri, a guest who was at the hotel for a conference, was in the hall of the hotel when he saw four gunmen dressed in army uniforms.

“They were shouting in Pashto (language), ‘Don’t leave any of them alive, good or bad’. ‘Shoot and kill them all,’ one of them shouted,” Naseri said.