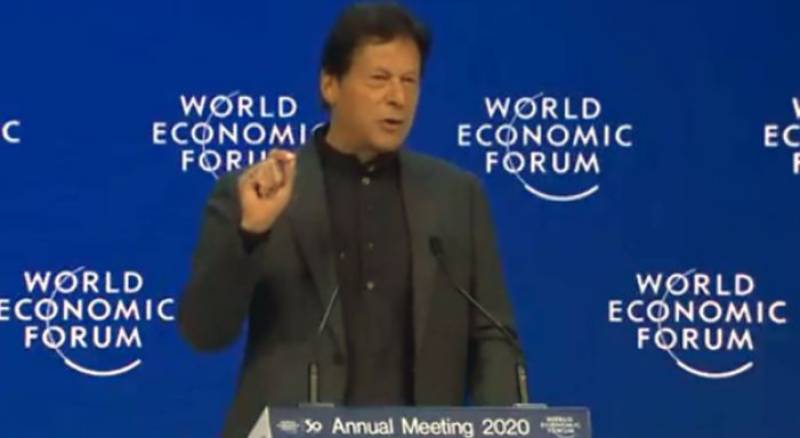 Opening his speech, the prime minister talked about his government's tree plantation campaign, which he said was expanded across the country after seeing its success in Khyber Pakhtunkhwa (KP).

Imran Khan said the government aims to plant 10 billion trees during next four years to deal with the consequences of climate change. "We made people understand that Pakistan was vulnerable to climate change," He said

He added that the women in the mountainous regions took part in planting nurseries."

Prime Minister Imran Khan said one of the biggest challenges that Pakistan had faced throughout its history was getting involved in conflict. He said the Soviet conflict in Afghanistan and then the War on Terror had disastrous effects on Islamabad.

"Since our government got elected, we decided Pakistan will never become part of anyone's war now," he said.

The premier said his government had decided to resolve conflicts between other countries but never to become part of any war.

He said keeping in mind this policy, Islamabad had played its part in helping defuse tensions between the US and Iran as well as "easing tensions" between Iran and Saudi Arabia.

The prime minister said Pakistan is placed at a very important geostrategic position.

He said with the peace in Afghanistan, Pakistan can tap the benefits of energy rich Central Asia besides acting as a bridge between East and West Asia.

Khan said Pakistan was playing its part to ensure peace prevailed in Afghanistan and that it was the "nearest we are to some sort of peace in Afghanistan."

Imran Khan said that his government inherited the biggest fiscal deficit when it came to power in August 2018.

"We have gone through a very tough economic period and people are hurting," he said. "Now we hope to return to growth."

The PM said one of the advantages in Pakistan is its youthful population but regretted that "we have neglected this young population because we have not equipped them to become entrepreneurs."

He noted that the government has now has started a programme for skills development.

Imran Khan said Pakistan is endowed with rich mineral resources including gold and other deposits and we are now focusing to exploit these fully.

“Apart from minerals, Pakistan is blessed with fertile land whose full potential has yet to be explored,” the PM said.

He said with the help of China under China Pakistan Economic Corridor (CPEC), work is being done in enhancing the agricultural productivity of the country.

PM Imran said the biggest challenge for his government is to bring reforms in state institutions to improve governance and work is being undertaken in this regard.

Earlier, speaking to the International Media Council on the sidelines of the WEF, the prime minister said that a war between two nuclear-armed countries cannot even be contemplated.

He said that the policies of the Modi government in Indian Occupied Kashmir (IOK) were the main cause for deteriorating relations between Islamabad and New Delhi.

PM Imran said that the international powers including the United Nations (UN) and the United States (US) "must act" to prevent tensions between the two nuclear-armed countries from reaching a point of no return.

He urged to send international observers on fact finding mission in Kashmir as it was becoming a flash point between two nuclear armed neighbors.

Khan said he was a "firm believer" in peace and that military conflicts were never the solution to problems.

The premier said he reached out to Modi to settle disputes between the two countries when he first became prime minister. However, he said the reaction from Modi was "quite weird".

PM Imran recalled that he "came across a brick wall" when he reached out to Indian Prime Minister Narendra Modi after assuming office in 2018, and the relationship deteriorated with India sending fighters jets into Pakistani territory in retaliation for the Pulwama attack in occupied Kashmir.

Speaking about Afghan peace process, Prime Minister Imran Khan said that Pakistan and the US were on same page to resolve the Afghan issue through negotiations.

He said the situation in Afghanistan has always impacted Pakistan and only long term prosperity can come with peace in the war torn country.

PM Imran appreciated the policy of Trump administration to hold dialogue and talks with Taliban to come out of Afghan imbroglio.