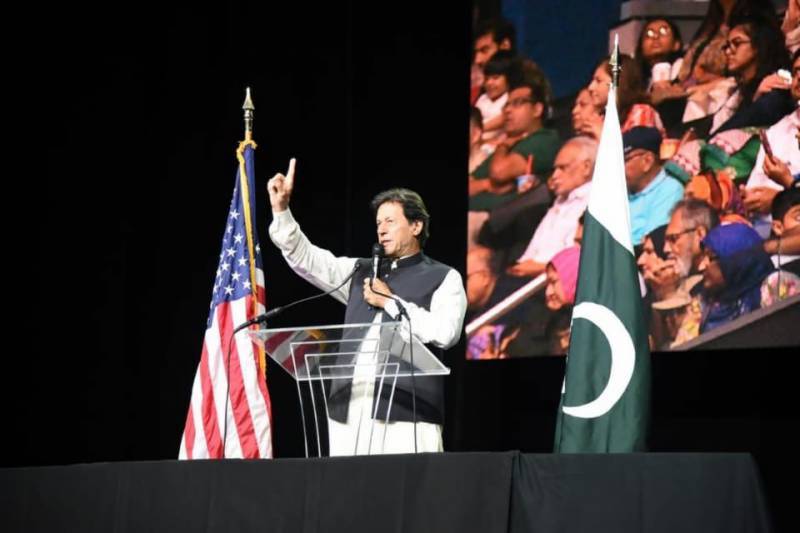 Addressing a huge gathering of Pakistani community at Capital One Arena in Washington, the prime minister said that Pakistan Tehreek-e-Insaf (PTI) government will change the system in the country so that it runs on merit, and where everyone gets an opportunity to prosper.

The prime minister’s address to a large public gathering marked an unprecedented occasion for the Pakistani-American community. The crowd cheered the prime minister as he reiterated his pledge to root out corruption – a major issue in his political rise.

“We will pull our country out of its current difficulties,” Imran Khan said referring to economic challenges his government had inherited.

PM Imran, who is in Washington for his first meeting with US President Donald Trump at the White House, particularly talked about streamlining the education system. He said the government was planning to introduce modern subjects like science in Madrassas (seminaries) so that the poor might also have a better economic opportunity.

On economic reforms, he underscored the need for improving Pakistan’s tax to GDP (gross domestic product) ratio and facilitating investment.

Pakistan, he said, had been blessed with massive natural wealth and human talent, but politics of inheritance and corruption had kept the country from making use of the same.

“There is a difference between a democracy and a kingdom. Democracy honours merit but we have a system that serves the elite,” he added.

The prime minister said Pakistan’s founding fathers envisaged it to be a welfare state on the mode of State of Madina, where rulers were accountable, and people shared their wealth through Zakat.

“We want to build a nation. We want to bring a change for the better. Merit will become a reality when we get rid of the rule of families,” he said, citing the example of the US where the system recognizes merit.

He said the government would reform all the loss-making entities it had inherited including the PIA, Pakistan Railways, power and gas sectors.

“There is a bit difficult time of four to six months or a year. We will get Pakistan out of it and make its self-dependent,” the prime minister added.

Reiterating his government’s stance of documentation of the national economy, Khan warned the traders that they would have to pay taxes to make the country pay back the hefty loans which had swelled from Rs 6,000 billion to Rs 30,000 billion during the last ten years.

The PM said the previous rulers would have to return the looted money if they wanted to get rid of jail or go abroad.

“This is Tabdeeli (change). In Pakistan, law never accounted the influential ones. This is Tabdeeli. This will rise the nation and make the Pakistan a great country,” he added.

Imran Khan said the opposition leaders facing corruption cases wanted an NRO (National Reconciliation Ordinance), but he would not rest until his government recoverd the looted national wealth.

He particularly referred to jailed forrmer prime minister Nawaz Sharif and former president Asif Ali Zardari and said they had a way out, which was simply to return the looted public money.

The prime minister announced to withdraw the A-class jail facilities from Nawaz Sharif and Asif Zardari and jail them along with the ordinary prisoners.

He said, “Pakistan has $200 billion copper deposits, mammoth reserves of coal, but corruption has held us back.”

The prime minister, who held a number of meetings with Pakistani origin and American investors, said his government would ensure a clean environment to do business.

“I promise that foreign companies will flow into Pakistan. We will end corruption, attract investment and make progress, we will have industrial growth. We will never ignore Pakistan’s potential.”

The prime minister also announced to reform the Pakistani cricket team and assured the community that in the next World Cup, they would see an efficient and capable team in the field.

Imran Khan also assured the nation that he would put their case before President Trump and would neither embarrass them nor let them down before any one.

He said since very first day he had been opposing the military solution in Afghanistan for what he was heavily criticized.

“What you want me to say to talk to Trump…I am proud that … now the whole world is saying that Afghanistan has no military solution. Insha Allah, I will put your case before Donald Trump. I will not embarrass you, Insha Allah,” he added.

The prime minister told the charged gathering holding party flags that while coming into politics some 23 years ago, “I have never bowed down before anyone except Allah and Insha Allah would not let my nation down before anyone.”

Earlier, thousands of people accorded a rousing welcome to the prime minister as he entered the venue in white shalwar kameez and charcoal waistcoat. He waved to the audience who arose from their seats to welcome the one whom they had been yearning to see.

Started with the recitation of Surah Fateha followed by the national anthems of Pakistan and the United States, the event was moderated by Senator Faisal Javed in his signature style.

The audience waved their mobile phones’ flashlights on a national song ‘jaag utha hay sara watan’ before the thrilling performance of Junoon band.

A video documentary was shown on the journey of Imran Khan starting from his cricketing career, building Shaukat Khanum cancer hospital, formation of the Pakistan Tehreek-e-Insaf, political struggle and then becoming the chief executive of the country, falsifying all discouraging notions.