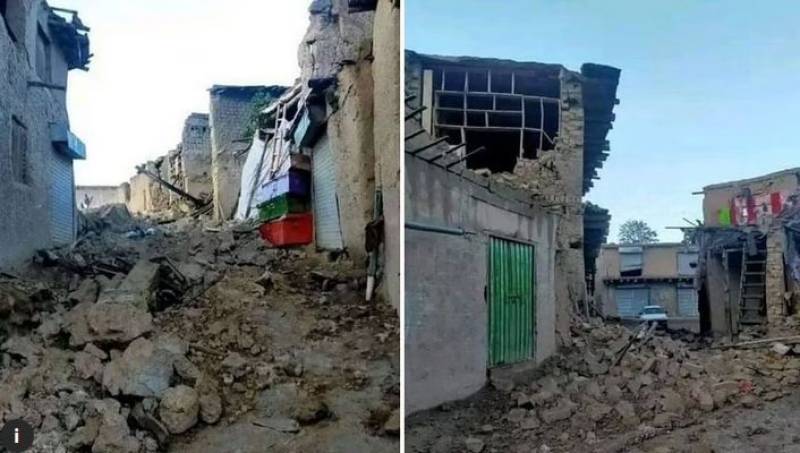 Islamabad (Web Desk): The civil and military leadership of Pakistan on Wednesday expressed grief and sorrow over loss of precious human lives in earthquake in Afghanistan.

President Dr Arif Alvi expressed grief and sorrow over the loss of lives in an earthquake in Afghanistan.

The president said Pakistan stands with its Afghan brethren in this hour of grief.

He prayed for the departed souls to rest in peace and extended sympathies to the injured families.

Expressing grief and sorrow over the loss of precious lives in the earthquake, Prime Minister Shehbaz Sharif said that Pakistan stands with Afghan brothers and sisters in this difficult time.

In a statement, the premier said that Pakistan will provide all possible assistance to the people of Afghanistan.

PM Shehbaz directed the authorities concerned to assist the affected people in Afghanistan.

Foreign Minister Bilawal Bhutto Zardari also expressed sorrow over loss of innocent lives and reiterated that Pakistan stands with its neighbor in these testing times.

He urged international community to play its role to help Afghan people.

Deeply grieved to learn about earthquake in Afghanistan, resulting in loss of innocent lives. People in Pakistan share the grief & sorrow of their Afghan brethren. Relevant authorities working to support Afghanistan in this time of need.

In his message on Twitter, former prime minister Imran Khan wrote "My condolences & prayers go to the Govt & people of Afghanistan for the loss of lives suffered in the earthquake".

Imran Khan said he directed his Pakistan Tehreek-e-Insaf (PTI) government in Khyber-Pakhutnkhwa KP government to facilitate medical facilities for the affected people in the neighboring country.

My condolences & prayers go to the Govt & people of Afghanistan for the loss of lives suffered in the earthquake. I have asked the KP Govt to especially facilitate provision of all medical assistance.

Meanwhile, Pakistan's armed forces have also expressed deepest condolences over tragic loss of precious lives and damage to infrastructure due to earthquake and torrential floods in various areas of Afghanistan.

Armed Forces of Pakistan are ready to provide all possible humanitarian assistance to people of Afghanistan, he said.

CJCSC & Services Chiefs express deepest condolences over tragic loss of precious lives & damage to infrastructure due to earthquake & torrential floods in various areas of Afghanistan. AFs of Pakistan are ready to provide all possible humanitarian assistance to people of Afg.

At least 1000 people were killed and hundreds were injured in a 6.1-magnitude earthquake in Afghanistan on early Wednesday.

According to Afghan authorities, the toll is expected to grow as information trickles in from remote mountain villages.

Wednesday's quake was the deadliest since 2002.

According to US Geological Survey, the earthquake occurred at 1:54am (PST), about 44 km (27 miles) from the city of Khost, near the Pakistan-Afghanistan border, at a depth of 51 km. The tremors were felt over some 500km by about 119 million people in Pakistan, Afghanistan and India.

In Pakistan, tremors were also felt in Peshawar, Islamabad, Lahore, Kohat, Mohmand, Swat, Buner and other parts of Punjab and KP.