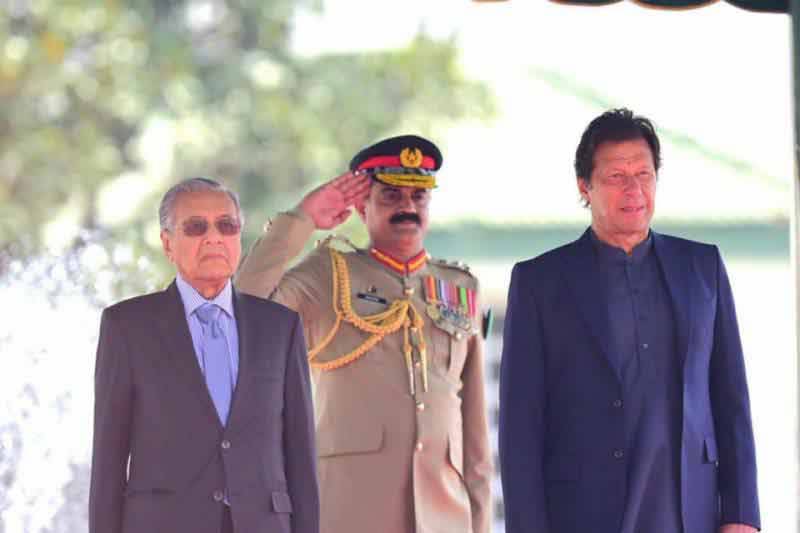 Islamabad (Staff Report/Agencies): Prime Minister Imran Khan and his Malaysian counterpart Dr Mahathir Mohamad vowed to work together to improve the perception of Muslims in the world.

He appreciated the Malaysian premier for taking a stand for Muslims in the aftermath of the New Zealand terror attacks at two mosques that killed at least 50 people, including nine Pakistanis.

Admiring Mahatir, PM Imran appreciated the Malaysian PM for his stand against corruption. "Corruption is what destroys institutions and takes away money that should be spent on human beings and on human development," he said.

Your comeback was one of the most remarkable comebacks,” Imran Khan Malaysian counterpart.

The Malaysian PM said traders of both countries will be facilitated in doing business with each other.

Mahathir said his country has set the target of becoming a developed country by 2025.

He regretted that there is not a single Muslim country in the category of developed nations. He said other Muslim countries should also strive to develop themselves at par with the developed countries.

On Islamophobia, Mahathir Muhammad said there is fear, hatred and enmity towards Muslims and this is why Christchurch attack took place. He urged need to find ways to combat Islamophobia.

He said Pakistan and Malaysia can also cooperate on this particular issue with the aim to bring improvement in the perception of Muslims and reduce hatred and fear towards Muslims.

As the welcome reception kicked off, the national anthems of both countries were played and the visiting dignitary was given a Guard of Honour by a contingent of the armed forces.

The Malaysian PM arrived in Pakistan on Thursday on a three-day visit at the invitation of Prime Minister Imran Khan.

Mahatir Mohamad will be the guest of honour at the Pakistan Day Parade on March 23.

Chairman Board of Investment (BOI), Haroon Sharif also accompanied Dawood on this occasion.

The investments would come in different sectors of the economy including telecoms, Information technology and food, he added.