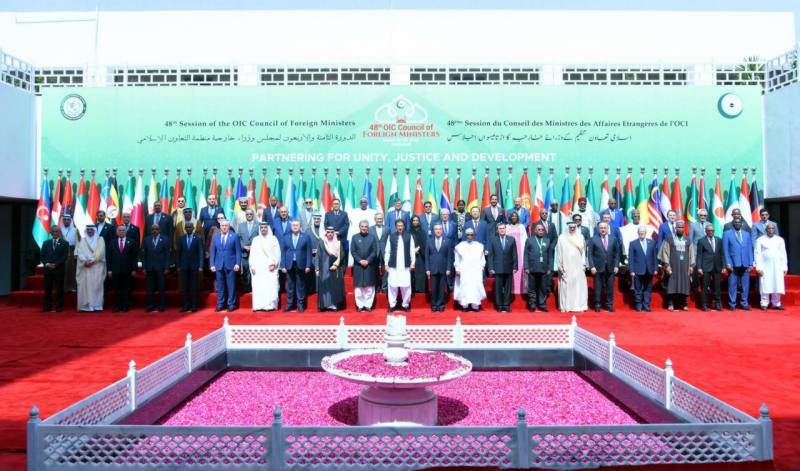 Islamabad (Web Desk/Agencies): The inaugural session of the two-day meeting of the Council of the Foreign Ministers of Organization of Islamic Cooperation (OIC) started in Islamabad on Tuesday as Pakistan is hosting its 48th session.

According to details, Prime Minister Imran Khan joined the gathering of the foreign ministers of the Muslim world at the session held at the Parliament House.

As the session started, the national anthem of Pakistan was played on the occasion.

The verses from the Holy Quran were recited. A short video of the OIC journey was screened on the occasion highlighting the Muslim unity as key to success.

Hassoumi Massoudou, Foreign Minister of the Republic of Niger and also the Chair of the 47th session of the OIC Council of Foreign Ministers (OIC-CFM) in his speech focused on the objectives of OIC and emphasized the need for collaborated efforts to address the common challenges.

He handed over the Chair of the 48th session of the OIC-CFM to Pakistan represented by Foreign Minister Shah Mahmood Qureshi.

Prime Minister Imran Khan in his keynote address at the inaugural session will highlight Pakistan’s role and contribution towards OIC and deliberate on the challenges faced by the Muslim world.

The video message of Secretary-General of the United Nations (UN) Antonio Guterres will be shown on the occasion.

The theme of the session is ‘Building Partnerships for Unity, Justice, and Development.

More than 100 resolutions will be considered during the two-day session.

The session coincides with the 75th anniversary celebrations of Pakistan’s independence.

On March 23, the visiting foreign ministers will visit the Pakistan Day parade venue and witness the professional capability of Pakistan’s armed forces and the traditional floats of all the provinces, reflecting the national unity.

Later in the day, FM Qureshi along with OIC Secretary General Hissein Brahim Taha will hold a joint press stakeout following the conclusion of the session.

The summit will also discuss developments in Afghanistan and its humanitarian consequences for the Afghan people and the situation in Jammu and Kashmir.

The OIC foreign ministers will also discuss developments in Yemen, Libya, Sudan, Somalia, Syria, and other regions during the summit.

Pakistan has a proud history of hosting major OIC events including Summits and Council of Foreign Minister (CFM) meetings. The country hosted the 2nd OIC Summit in Lahore, inFebruary 1974. An Extraordinary OIC Summit was held in Islamabad in 1997, on the occasion of Pakistan’s Golden Jubilee.