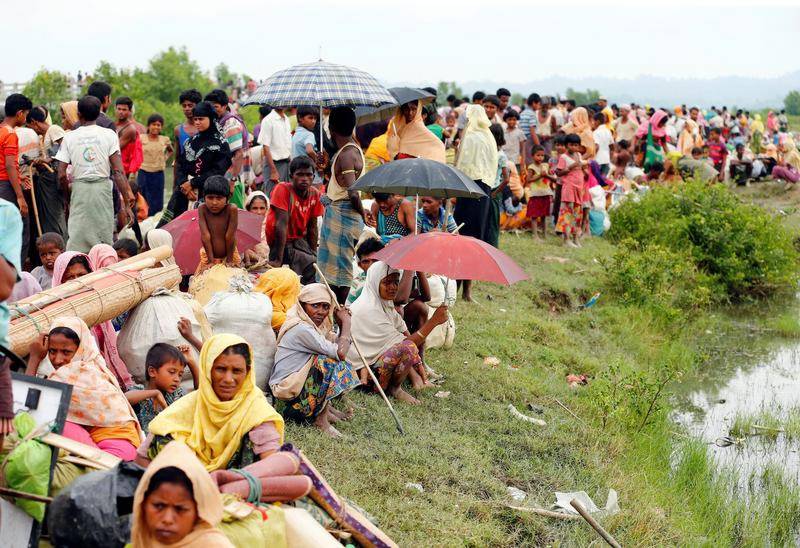 Myanmar (Reuters): Rohingya Muslims who return to Myanmar after fleeing to Bangladesh are unlikely to be able to reclaim their land, and may find their crops have been harvested and sold by the government, according to officials and plans seen by Reuters.

Nearly 600,000 Rohingya have crossed the border since Aug. 25, when coordinated Rohingya insurgent attacks on security posts sparked a ferocious counteroffensive by the Myanmar army.

The United Nations says killings, arson and rape carried out by troops and ethnic Rakhine Buddhist mobs since late August amount to a campaign of ethnic cleansing against the Rohingya.

Civilian leader Aung San Suu Kyi, who has no control over the military, has pledged that anyone sheltering in Bangladesh who can prove they were Myanmar residents can return.

Reuters has interviewed six Myanmar officials involved with repatriation and resettlement plans. While the plans are not yet finalised, their comments reflect the government’s thinking on how Suu Kyi’s repatriation pledge will be implemented.

Jamil Ahmed, who spoke to Reuters at a refugee camp in Bangladesh, is one of many Rohingya who hope to go back.

Describing how he fled his home in northern Rakhine state in late August, Ahmed said one of the few things he grabbed was a stack of papers - land contracts and receipts - that might prove ownership of the fields and crops he was leaving behind.

“I didn’t carry any ornaments or jewels,” said the 35-year-old. “I’ve only got these documents. In Myanmar, you need to present documents to prove everything.”

The stack of papers, browning and torn at the edges, may not be enough, however, to regain the land in Kyauk Pan Du village, where he grew potatoes, chilli plants, almonds and rice.

“It depends on them. There is no land ownership for those who don’t have citizenship,” said Kyaw Lwin, agriculture minister in Rakhine state, when asked in an interview whether refugees who returned to Myanmar could reclaim land and crops.

Despite his land holdings, Myanmar does not recognize Ahmed as a citizen. Nearly all the more than 1 million Rohingya who lived in Myanmar before the recent exodus are stateless, despite many tracing their families in the country for generations.

Officials have made plans to harvest, and possibly sell, thousands of acres of crops left behind by the fleeing Rohingya, according to state government documents reviewed by Reuters.

Myanmar also intends to settle most refugees who return to Rakhine state in new “model villages”, rather than on the land they previously occupied, an approach criticized in the past by the United Nations as effectively creating permanent camps.

The government has not asked for help from any international agencies, who are calling for any repatriation to be voluntary and to the refugees’ place of origin.

The exodus of 589,000 Rohingya - and about 30,000 non-Muslims - from the conflict zone in northern Rakhine has left some 71,500 acres of planted rice paddy abandoned and in need of harvesting by January, according to plans drawn up by state officials.

Tables in the documents, reviewed by Reuters, divide the land into paddy sown by “national races” - meaning Myanmar citizens - or “Bengalis,” a term widely used in Myanmar to refer to the Rohingya, but which they reject as implying they are illegal migrants from Bangladesh.

Kyaw Lwin, the state minister, confirmed the plans, and said there was a total of 45,000 acres of “ownerless Bengali land”.

Two dozen combine harvesters operated by officials from the agriculture ministry will begin cutting stalks this month in areas under military control.

The machines will be able to harvest about 14,400 acres according to official calculations contained in the plans. It is unclear what will become of the remaining crop, but officials told Reuters they would try to harvest all the paddy, recruiting additional labor to harvest manually if necessary.

An acre of paddy in Myanmar typically makes more than $300 at market, meaning the state will gain millions of dollars worth of rice.

The harvested rice will be transported to government stores, where it would either be donated to those displaced by the conflict or sold, Rakhine state secretary Tin Maung Swe told Reuters by phone.

“The land was abandoned. There is no one to reap that, so the government ordered to harvest it,” he said.

Human Rights Watch (HRW) deputy Asia director Phil Robertson, said the government should at least guarantee that the rice would be used for humanitarian support and not for profit.

Three killed, over 100 arrested as TLP protests continue for a second day across Pakistan

“You can’t call a rice crop ‘ownerless’ just because you used violence and arson to drive the owners out of the country,” he said.

Many refugees are fearful to return and are skeptical of Myanmar’s guarantees. Those who do decide to cross back into Myanmar will first be received at one of two centers, according to government plans reviewed by Reuters, before mostly being relocated to model villages.

International donors, who have fed and cared for more than 120,000 mostly Rohingya “internally displaced persons” (IDPs) in supposedly temporary camps in Rakhine since violence in 2012, have told Myanmar that they will not support more camps, according to aid workers and diplomats.

“The establishment of new temporary camps or camp-like settlements carries many risks, including that the returnees and IDPs could end up being confined to these camps for a long time,” said U.N. spokesman Stanislav Saling in an emailed response.

Satellite imagery shows 288 villages, mostly Rohingya settlements, have been fully or partially razed by fires since Aug. 25, according to HRW.

Refugees say the army and Buddhist mobs were responsible for most of the arson. The government says Rohingya militants and even residents themselves burned the homes for propaganda.

The hamlets where Rohingya farmers lived were “not systematic”, and so should be rebuilt in smaller settlements of 1,000 households set out in straight rows to enable development, said Soe Aung, permanent secretary at the Ministry of Social Welfare, Relief and Resettlement.

“In some villages there are three houses here, four houses over there. For example, there’s no road for fire engines when fire burns the villages,” Soe Aung said.

Those who decide to cross back into Myanmar will first be received at one of two centers, according to government plans reviewed by Reuters.

At the centers, officials said, the returnees will fill out a 16-point form that will be cross-checked with local authorities’ records. Immigration officials have for years visited Rohingya households at least annually for checks, photographing family members.

For refugees who lost all their documents, the government would compare their photos to those that immigration authorities have on file, said Myint Kyaing, the permanent secretary at the Ministry of Labour, Immigration and Population.

Officials will accept as evidence “national verification” cards handed out in an ongoing government effort to register Rohingya that falls short of offering them citizenship. The card has been widely rejected by Rohingya community leaders, who say they treat life-long residents like new immigrants.

“We are not going to go back like this,” said Mushtaq Ahmed, 57, a farmer from Myin Hlut village now living in the Tenkhali refugee camp in Bangladesh, where Jamil Ahmed is also staying.

“If I can go back to my house, and get my land back, only then I will go. We invested all our money into those paddy fields. They are killing so many of us with swords and bullets, and killing the rest of us like this.”