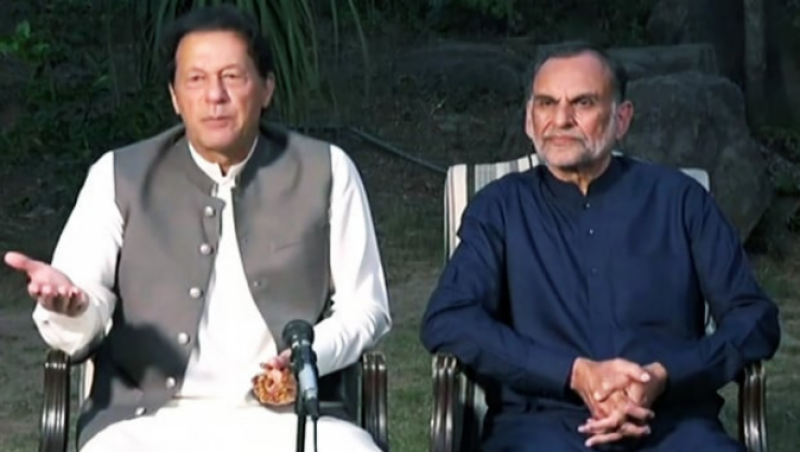 Islamabad (Web Desk): Former premier and Pakistan Tehreek-e-Insaf (PTI) Chairman Imran Khan on Saturday stated that he will announce the date for his "Haqeeqi Azadi March" next Thursday or Friday.

Addressing a press conference alongside PTI Senator Azam Swati, Imran Khan said that he was not hopeful of the government holding snap elections.

He further stated that the march would be peaceful. “In my party’s 26-year history, we have done everything peacefully. Families will also participate. We will not let any violence take place.”

"This time, the march will be peaceful, and people will enjoy it," the PTI chief asserted.

The former premier played down the reports of his arrest and said that even if he were behind bars, the long march would take place.

Imran Khan railed against the coalition government and the treatment being meted out to its political opponents.

The PTI chief added that he would not allow the government to torture or harass his party leaders and workers like the last time. "This sort of violence does not take place anywhere in the world."

Giving the example of Shahbaz Gill, Imran Khan alleged that the ex-adviser to the PM was tortured, stripped naked and sexually assaulted. "He is a professor, not a criminal."

The PTI chief vowed to approach every forum over the "custodial torture" of Swati. "I am upset that they did not take action."

He questioned the law under which this action was taken.

"Swati was beaten in front of his grandchildren," Khan said, adding that the PTI Senator was later "handed over" where he was beaten after being stripped naked.

The former premier asserted that by "insulting and scaring" citizens, state institutions were only flaming the fans of hatred against them. Imran also termed the country a "banana republic."

He alleged that there were "unnamed people" who everyone was scared of because if anyone makes a social media post against them, they are "picked up and beaten."

"These people are not benefitting our country in any way. They are destroying it."

Imran Khan's statement comes a day after Election Commission of Pakistan (ECP) disqualified him in the Toshakhana reference on Friday.

Earlier today, Imran Khan moved the Islamabad High Court (IHC) against his disqualification by the ECP.