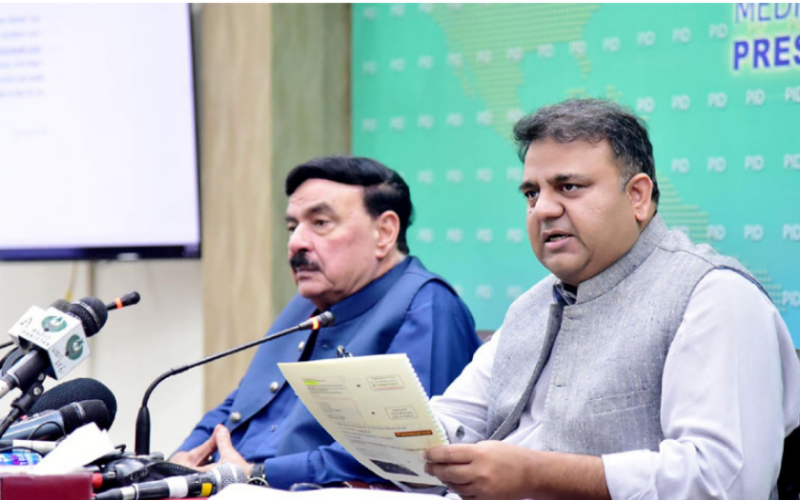 Addressing a press conference in Islamabad alongside Federal Interior Minister Sheikh Rashid Ahmed, Fawad Chaudhry said that the entire situation started due to a fake post by someone claiming to be Tehreek-e-Taliban Pakistan (TTP) militant Ehsanullah Ehsan.

"The post stated that New Zealand cricket team should not go to Pakistan as Daesh would attack it," the information minister said.

Following the false post, The Sunday Guardian published an article claiming that the team may face a terror threat in the South Asian country, the article used the fake post for the phony claims.

Chaudhry said that The Sunday Guardian was founded by a former Indian minister for external affairs who is also a close ally of Indian PM Modi. He also mentioned ties between the bureau chief of the Indian publication and former Afghan VP Amrullah Saleh.

He said that on August 24, New Zealand opener Martin Guptill's wife received an email threatening her husband from ID with the username "Tehreek-e-Labbaik".

The email threatened that the cricketer would be killed in Pakistan and the minister added that the email was sent via ProtonMail, a secure service.

The minister maintained that despite all these threats, the New Zealand cricket team arrived in Pakistan and was given an excessive security detail.

Fawad Chaudhry said that the New Zealand team had their practice sessions, alongside the Pakistan cricket team, and faced no issues.

However, a day before the first match, the Kiwis said that their government had concerns of a credible threat and cancelled the tour, he said.

"Pakistan Cricket Board (PCB) officials, interior security team, everyone went to them and asked them to share the threat, however, they were as clueless as us."

The minister said that a day later, a second threatening email was sent to the New Zealand cricket team under the username 'Hamza Afridi'.

The email claimed that the New Zealand cricket team had done “wrong” by leaving Pakistan and would be terrorised by them. “I will place a bomb wherever your cricket team goes, from hotels to stadiums,” Chaudhry quoted the email.

The minister said that the investigations showed that the email was sent from a device associated with India, using a virtual private network (VPN) so that the location was shown as Singapore.

He elaborated that the same device had 13 other IDs, the majority of which were Indian names, adding that only the name Hamza Afridi is different, in an attempt to show that the email was generated from Pakistan.

“The name was used deliberately to show that a terrorist threat is present in Pakistan.” He further said that the user of the device had been identified as Omprakash Mishra from Maharashtra, India.

“The device used to send the threat to the New Zealand team belonged to India. A fake ID was used but it was sent from Maharashtra,” the minister maintained.

The minister added that the interior ministry had registered a case and had requested Interpol for assistance and information on the 'Tehreek-e-Labbaik' ProtonMail account and the ID of Hamza Afridi.

"This whole threat was primarily generated from India," he said.

New Zealand Prime Minister Jacinda Ardern had backed the Kiwi cricket board’s decision to call off the entire tour over the undisclosed security alert, even after assurances from Prime Minister Imran Khan.

The tour was due to get underway with the first of three ODIs in Rawalpindi on September 17 but the team did not travel to the stadium.

New Zealand Cricket (NZC) then issued a statement announcing their decision to call off the tour.

"Following an escalation in the New Zealand Government threat levels for Pakistan, and advice from NZC security advisers on the ground, it has been decided the Blackcaps will not continue with the tour," it had said.

The NZC had declined to share details of the security threat and said arrangements were being made for the team's departure.

Commenting on England's decision to follow in the footsteps of New Zealand, the minister said that British High Commissioner Christian Turner had made it clear that the United Kingdom (UK) government's advisory for Pakistan was not being changed.

“If the government has no reservations, then who is English Cricket Board (ECB) to cancel the tour,” he said.

The information minister said that he had asked Pakistan Television to evaluate the financial losses it had suffered. "We are working on this and if our legal team permits, we will sue the ECB," he added.