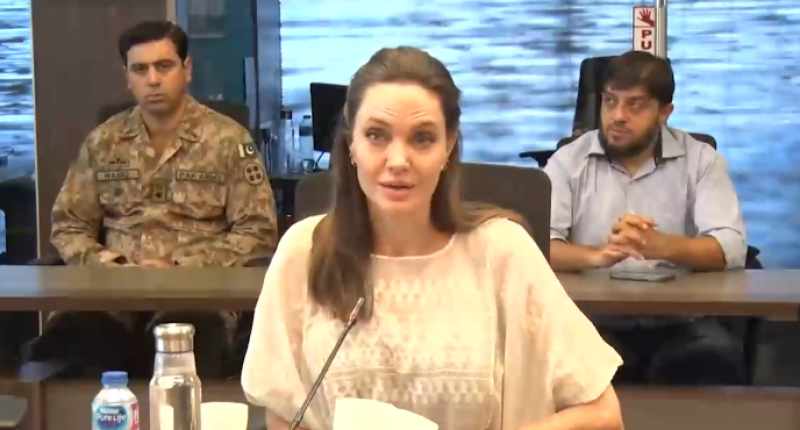 Deputy Chairman NFRCC Ahsan Iqbal welcomed Ms Jolie and thanked her for visiting Pakistan during the most devastated floods in the history of Pakistan.

She was briefed about flood response and measures taken.

Speaking on the occasion, Angelina Jolie said she is deeply moved to see people's suffering during her visit to Dadu in Sindh province where she met flood victims.

"I've never seen anything like this before," the actress while calling the upon the world community to come forward and help Pakistan tackle the flood relief.

"I am with flood affected people and will make my efforts to let the world know the scale of devastation these climate changes have done and the lifesaving support the flood-affected people need," the UNHCR Goodwill Ambassador said.

The actress said that as a humanitarian aid worker, she believes that Pakistan is in a critical situation where "needs are so overwhelming and truly every effort is either life or death for so many people."

The actress said more needs to be done for the flood-affected people as winter is just around the corner.

Angelina Jolie also drew the world's attention to climate change, saying the threat is "not only real, but it's also not only coming, it's very much here."

Angelina Jolie previously visited Pakistan in 2010 and 2005 to meet victims of the earthquakes.

She is currently visiting as part of the the International Rescue Committee’s (IRC) emergency response operations.